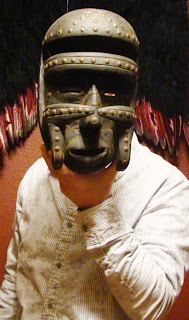 Hiding behind a mask of words
from a vivid imagination,
he kept people at a distance.
To trust was to allow vulnerability.
Anonymity was a safe home,
a place to hide,
yet reveal in bits and pieces
while speaking from the heart:
his true source
of feelings and soul.
Read me and know me. 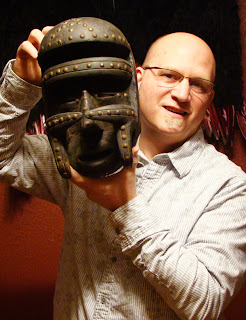 A few weeks ago, I was considering shelving What The Hell Wednesday due to the low number of comments which I interpret as lack of interest on the part of blog readers. Then a few thoughts started playing air hockey in my head with my tiny little brain. Like: why am I being such a comment whore; Why should I care if readers like it if I get enjoyment out of it; and how can I not continue this goofy adventure into the world of the stupid and inept when there are headlines out there like these...

"Nude burglar was tripping on acid"
"Man traded borrowed car for drugs"
"Man says he was beaten with frozen meat"
"No, officer, I stole more than that"
"Man calls 911 on 'The Media'"

You see each week it is a tough call to come up with a great story because they are all so good. My WTHW choice of this week goes to this headline and story.

Wife 'snaps'. Beats her husband with rock for smoking while he was sick

Callaway, FL — A woman was arrested Wednesday morning for beating her husband with a rock, claiming she didn’t want him to smoke a cigarette because of his poor health.


“A woman can only take so much,” she told a deputy.


According to a Bay County Sheriff’s Office incident report, the couple’s 18-year-old daughter called 9-1-1 about 11:31 a.m. Wednesday when she saw her mother beating her father with a rock.


A deputy said that, when they arrived at the scene off North Lakewood Drive, he saw the victim sitting “Indian fashion” on the ground in front of the residence; he was hunched over with his hands over his head, trying to protect himself. His wife was standing behind him. She kicked him in the hip and was using a rock to hit him in the head, the report said.


A deputy told the 41-year-old woman to get off her husband a few times, but she continued to strike him and scream at him, telling him “to give her the cigarettes,” the report said.

Both husband and wife told deputies they had been suffering with the flu recently and had not felt well. The night before, they got into an argument and the woman scratched her husband’s face, the report said. When he mentioned going outside to smoke a cigarette that morning, the wife became angry and told him “he did not need to be smoking since he is sick,” according to the report.


She followed him outside and began to argue with him, then jumped on him and began hitting him in the head with “a small ceramic bird,” the report said. She grabbed other items to hit him, finally picking up a rock.


The man refused treatment by EMS. He said “he knew how to take care of himself,” the report said.


The woman was charged with aggravated battery domestic violence. She said she had been dealing with “a lot of (expletive)” for some time and “a woman can only take so much,” the report said.

She said she was upset because he had the flu and she told him not to smoke, but he went outside and smoked anyway. She added, “A person can only take so much before they snap,” the report said.

Told what she was being charged with, she responded, “Yeah, I hit him with the rock,” according to the report.

The rock was submitted into evidence.

Now THAT'S conflict resolution of the highest order. "Do what I tell you or I'll hit you with a rock". Now I know you are all saying, "Monkey Man, that was a really long story. How can you expect us to read all of that when we have 856 other blogs to read and comment on?" Well, when a story is this good you just have to go with it. Besides that....it's my blog and I'll do what I want. But if it will make you feel better, I will keep my own comments on the story short so you can move on to more poetry and "my cat coughed up a hair ball" blogs. I know, I write and read poetry, but personally, I need more. So sets my personal record for the number of times I can use 'I' in a sentence.

Okay back to the story at hand. This story really speaks for itself but what shocks me is that this couple raised a daughter who has the where with all to call 911. With these two geniuses at the parental helm, you would think she would be too busy sucking on a bong remember this is a PG (sort of) blog...so BONG it is to bring the police to the rescue.

I also love the line "A woman can only take so much". What? Before she starts beating people with rocks? If she beats him with a rock for smoking, what does she do if he leaves the toilet seat up? Does she bring out the club? A sharp knife? "You leave that toilet seat up one more time and you'll find yourself permanently sitting every time you have to pee." I also love how the beating started with "a small ceramic bird" and ultimately led to the rock. Apparently, she really wanted to make her point.

At least he went outside to smoke. Had he been beaten for smoking inside so he knew better? Or was it just an opportunity to get away from the nagging?

As the local police pulled up and observed the situation and yard strewn with blood spattered ceramic birds, rocks and other hard objects, they surely looked at each other and said, "What the Hell?" 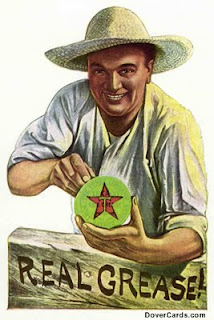 With gas prices continuing to escalate,
Texaco decided to sell a product
that would make it easier
for us all to accept the “circumstances”.

I jumped into this meme from Susan at Stony River.
If you want to play along, pay her a visit.
All you need is the ability to write a short story
in 140 characters (she accepts less).
However, if you like a more exacting challenge.
Try my Sunday 160 - a microfiction using EXACTLY 160 characters (including spaces).
Posted by Monkey Man at 10:31 AM 17 comments: 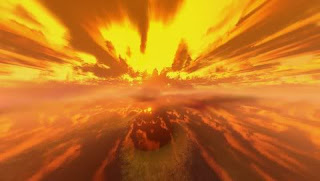