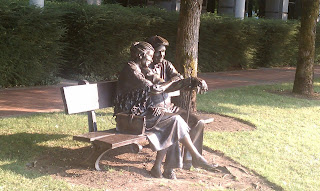 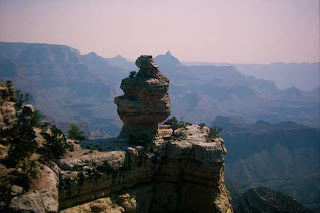 On the virtual eve of the tenth anniversary of the attack on the World Trade Center in New York, international terrorism is alive but a bit toned down in one of the world's most photographed natural wonders - The Grand Canyon.
International Terrorism Strikes Grand Canyon

Grand Canyon, AZ — An Ottawa man is facing two charges after spray-painting his name in red letters on a prominent, culturally significant, often-photographed rock face in the Grand Canyon National Park in Arizona.

According to a United States District Court complaint filed by a National Park Service Ranger the man admitted that he tossed the used can of spray-paint into the Grand Canyon after a tour leader and other bystanders began yelling at him.
Because of their uproar, Lucien Lionel Chenier only made it up to “Luci,” though he said he had intended to write his full name, according to the ranger’s affidavit.
In the affidavit the ranger said that National Park Service resource experts he called to the scene told him it would cost about $8,000 to remove the paint, which will have to be done by a restoration team from a high angle with ropes and other safety equipment.
The ranger said Chenier told him he was on an RV trip with his wife that started in Ottawa, went up through the Yukon to Alaska, then down through British Columbia and into the U.S. through Washington state.
“Chenier acknowledged visiting other national parks, although he wouldn’t name which parks he had been through in the United States,” reported the affidavit.
The affidavit added that Chenier said he chose the popular Duck on a Rock geological formation because “it was so special that if he left his name, then his kids would be able to see it 20 years from now.”
Chenier has been charged with damaging United States property in excess of $1,000 and littering.
__________________
What is with this Chenier fellow? Was he upset at the U.S. because the border patrol made him leave his Molson in Canada? Is the American beer too weak? Did he not find a souvenir tuque at the souvenir stand?
Then again, this didn't appear to be anger at the good ol' U S of A as much as just stupidity and extremely poor judgment. Help me, you Canadian readers! Is there a different set of morals and ethics up north? Are you trying to take over the US by placing your signatures on anything that stands still? Help me! Help me understand you!
I know, my Canadian friends are saying "Monkey Man, don't group us all together with one idiot that has the need to do unspeakable things to natures beautiful wonders. We are much smarter than this one character even though our football fields are 110 yards long, we only have three downs and allow twelve men on the field with as many people in motion as we can possibly have."
Truth be known, I. Just. Don't. Get it. From anyone, from any nation. Why would you want to vandalize something as awe inspiring as the Grand Canyon....or any other national treasure. Ours or another nation's.
Clearly, "Luci" had some 'splainin' to do. Not just that you want your kids to see your name emblazoned across a big rock in 20 years. Doesn't fly Cannuck.
Can you just hear the crowd from the tour group as they saw this fellow with his spray can and in unison said "What the Hell?" eh!
Posted by Monkey Man at 7:26 PM 8 comments: