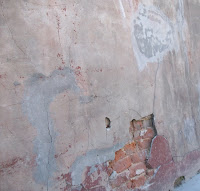 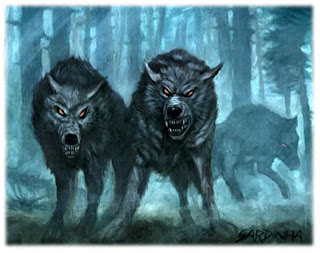 The nightly ritual was always the same. Lights out. Keep the door open just a crack - no more than two inches so it was dark but a little light was let in from the hallway and the voices of Mom and Dad and sometimes the television could be heard. Close the closet door. Pull the blankets all the way over his head and leave just a small opening so cool air to breathe could flow in but the monsters couldn't see him. Monsters that hid under the bed or crawled out of the closet. How they would get out of the closet when the door was closed, no one knows, but monsters are very innovative, you know. Especially in the mind of a young boy.

Apparently the blankets somehow made the boy invisible to his two most feared monsters - wolves and snakes. Just how wolves could sneak into suburbia then get into a house, past adults and through a two inch crack in the door only a fearful child's mind would know. On the other hand, snakes - huge, long, poisonous snakes with great fangs that bite and fat bellies that could constrict and consume - could lay hidden under a bed for hours and crawl through the smallest of entries.

Always the same fears every night from a child who stood up to neighborhood bullies and was first in line to defend a friend. Night fears made from dreams rode in on a spectrum of thought over which he had no control. The only other real fear was heights. The fearless boy couldn't climb a tree to play in a friend's fort. Even the tall platform his father erected for him had to be used by others since his stomach and mind couldn't handle the climb. "What if I fall" his mind would say.

Falling from a great height into a den of wolves and a pit of pythons - the worst of nightmares. A fall. A helpless broken body. Still feeling. Still alive. Left to be consumed by gnashing teeth and writhing, tearing fangs. It was more than the boy could handle.

Most of the night's dreams were harmless enough. It was only the bastion of fear - at falling asleep knowing something was in the room - that kept the heart racing and the mind too occupied to slumber. But sleep would come. Fears allayed by the echos of soft, protective parental voices off in another room.

Drifting off, the boy would find himself running along a cliff. Sometimes being chased. Sometimes just running. The cliff looked out over an ocean. Blue and deep. Seas swelling with the crash of waves. Jagged rocks at the bottom of the cliff gaping up as teeth of a mighty animal ready to devour. A slip. A fall. The worst of fears in the making. Falling. Falling toward the sea strewn rocks. He wakes. Sweating. Panicked. In fear, but thankful it was only a dream. 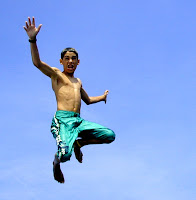 That morning the boy reflects on this dream. A dream he has had repeatedly. He hates his dream and his fear. He asks himself, "How can I stop this dream? How can I take control? If only I could fly." The idea strikes him with warmth, "If I could fly in my dreams, I could escape the fall or I could fly away from wolves and snakes."

The boy convinces himself to try to fly the next time one of those fear filled dreams of evil creatures or horrible crushing falls buzzes through his highly active mind. Nights come and go and the boy is almost disappointed that he hasn't had an opportunity to try flight. Then one stormy night when heavy rains, thunder and odd shadows bring fearful thoughts the right dream arrives. Chased by wolves, the boy runs though a forest, dodging trees, fighting through the underbrush, just staying out of reach of the fast closing beasts. 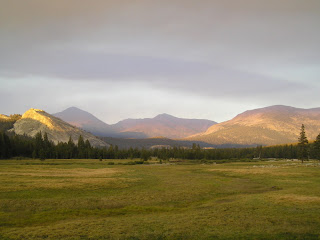 Before him lay an open field. A danger or a great fortune. He wasn't sure. In the open field he couldn't out run the wolves, but he could test his flight. His subconscious was excited. "Will I fly?" he asked himself. Off he ran into the field. He could feel the sound of the paws behind him. He leaped and woke up. "Not tonight. I won't find out if I can fly tonight," thought the boy as his heart pounded, reacting as if it had really been trying to out run a pack of wolves. But his fear was abated. He had made an attempt to take over his dream and it felt good. He was excited to try it again. Not fearful of being chased, caught and consumed. Excited.

Again nights past. The boy stayed confident his plan would succeed. He practiced running in fields near his home. Jumping. Leaping toward the sky. Visualizing himself lifting off and flying weightlessly and effortlessly over trees, houses, anything in his path. His friends ask what he is doing and when he replies, "I'm practicing to fly," they snicker but play along. Running with him and taking the last long steps before the pretend flight begins. They fall in heaps on the grass laughing. Turning the flying game into a game of tag as only young boys with an unending supply of energy can do.

Dreams can't be forced, but they can't be denied. After the nightly ritual is completed. The closet closed. The door left open a crack. The blankets forming a proper hood with tiny breathing space. Eyes drooping shut. Dreams come. 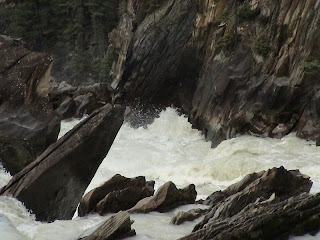 He finds himself walking along the sea side cliff. Seas again angry. Awaiting his fall. Rocks reaching up. Aching to mangle the bones of the fallen. He slips. The fall begins. "I wasn't able to run to take off", he thinks. "How will I fly?" He is falling. The rocks are closing in fast. He stretches his arms as he did in the fields by his home and feels himself in control. The ground stops getting closer. He feels himself taking off over the rocks and out toward the sea just as he had visualized. Effortless. Weightless.

The waters stretch out before him. Waves tossing. Reaching for him to take him in and under. He has none of it. Flying with joy. Turning. Looking back to the shore. Seeing it for the first time for its beauty, not its dangers. Swooping. Soaring. As a seagull on a breeze. No fears, just freedom.

When he wakes he knows he has had his first flying dream. He is in control and even more excited for the next night to come. Sleep no longer carries the fright of fearful creatures looking for blood and destruction. It is now a place of unrestrained power. 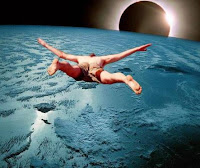 The next night he can hardly fall asleep he is so inspired. When sleep finally comes, he stands in his own front yard. He takes just a few short steps and surges skyward, flying over his neighborhood. Seeing it from above in every detail as if floating in an astral plain. Perhaps that is exactly what it was. A boy learning how to relax within himself and believing he could fly. What is to stop a young, open mind from achieving such a feat? Leaving the earthbound body for a joy ride through the air.
Posted by Monkey Man at 12:01 PM 3 comments:

"She was let go yesterday,"

I miss you my friend. 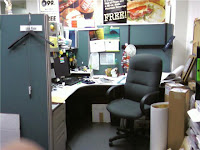