A yoga matt will not make you invincible 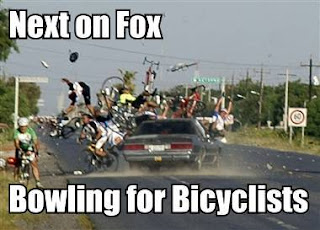 With the mood I am in and what I have gone through since last Wednesday, I should be writing about something that isn't fluff or flowers. Too bad. I just don't feel like going down the road of negative emotions. It has been crushing and outside of this short vent, not an avenue I am ready to take.

Instead, after a great Saturday morning of photographing doors around the Portland area and having a satisfying breakfast feast at Mississippi Street Station, I was driving home. As I crossed the Broadway Bridge and stopped at a light (kissed the bride as is our tradition) there was a young woman on a bike headed toward the light. She didn't stop. Just looked both ways and barrelled on through.

Now, as a one time avid cyclist who is now just a recreational rider, this always makes me cringe. A bicycle is required to obey laws of the road just like any other vehicle. But most important, this woman had nothing more for protection that the yoga matt strapped to her back - no helmet, no mirrors, no common sense. Not only is she endangering herself, but she is giving other cyclists a bad name. Hey! I'm a rider and those of us who ignore the rules piss me off. 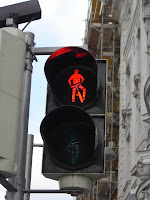 Lots of drivers out there already don't want to share the road with bikes - "they are so annoying and always act like they own the road". The reality is there is room for all. We just need to be respectful of one another. The cyclist should obey the rules and drivers should have a bit more patience and provide a wider berth when passing a bike. It seems so simple, but we are, after all, human beings and the centers of our own universes, so to think about others is often a stretch. Especially when we have already established that "we hate cars and drivers" or that "we can't tolerate the attitude of bikers".

Lighten up. We all end up at the same stop light. So slow down, take a breath and enjoy the company in your car or the music you're listening to and smile at the cyclists. If you ride a bike - obey the laws and smile back at the drivers. "Share the road" goes both ways.
Posted by Monkey Man at 2:35 PM No comments: Used to be you were either sick or on vacation when it came time to take a day or days off from work. But in today's corporate world we no longer have "sick leave" or "vacation days", there was even "mental health days". Now we have PTO - Paid Time Off. All you have to do is log on to your corporate web site, navigate to the correct form and fill out your PTO slip.

Of course they ask the reason, but here is where you can get creative. I suppose the old standbys would be "I had the flu," or "took a vacation day" or "stayed home with a sick child". But really, I mean, really, what did you do. There are now a whole big group of choices for reasons you stayed home. Try a few on for size and see which one fits you best.

So this is just a partial list and I'm sure you could come up with more, but as for me this was it because I called in lazy today and didn't feel like being that creative.

My Date With A Blue Haired Girl 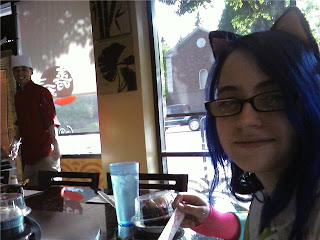 Last week I had a date with my daughter. It was dinner at her favorite Sushi restaurant followed by a quest to pick up a little something for her mother.

My daughter is a wonderful little girl - okay, she's 16 years old, but she's still my little girl and always will be - who happens to be diagnosed with an anxiety disorder that has effected her since she was a baby. She is very social, extremely likable, intelligent and has a keen moral fabric, much thanks to her wonderful and solidly based mother. Her anxiety isn't so crippling that she won't come out of her house, it is more fear of unknown, but on a scale that is beyond most people's understanding.

Our dinner out was simply fantastic. We entered the restaurant and heads turned. You see, my daughter has bright blue hair. She has her own sense of style and her hair color is a huge part of her persona. Hair color can also be changed, it isn't permanent, so if it makes her confident and happy, this dad is all for it. Remember, this is my little girl.

It was a delightful evening. There was an older woman with her thirty-something daughter sitting at the counter just down from us. She couldn't keep her eyes off my daughter and gave me the occasional glance as if to say, "How can you let your daughter go out in public that way." My typical reaction is to smile until they just look away. Don't try to place your set of standards on me or my daughter. As a friend of my wife's likes to say - "Fuck That!" My daughter didn't color her hair for shock value, it is just part of her artistic expression and for that I am glad.

Staring old folks aside, the waitress and the sushi chef were enthralled. Partly because they were closer to my daughter's age and "got it". But also because they talked with her and saw the spark, the creativity, the intelligence and great personality and were drawn to her like metal to a magnet. The chef was actually flirting and my daughter seemed most disinterested or perhaps just oblivious. He even made a special dish, just to show off a bit. While it wasn't one she liked, I can tell you it was delicious. I didn't mind being the benefactor of the spell she had placed over this young man. I like sushi. 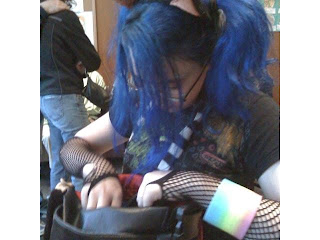 My daughter not only likes sushi, she likes everything Japanese. Manga. The language. The culture. The silly television shows. So when our waitress, who was a student at a nearby college, started talking about her visits to Japan, the two became instant friends. My little girl has that effect on people. She will also remember our waitress and all the details about her and pick it right up when we return. She is a terrific kid. I wish we were in a position to get her to Japan for study, but even if we could, her anxiety has the power to prevent her for even stepping on an airplane, let alone going so far as to Japan by herself. Fortunately that doesn't prevent her from following her heart and staying with her interests....domestically.

After our dinner, we were off to Best Buy on a quest for the Holy Grail of our household. Music has been an important part of our home since my kids were babies. Their mother always had CD's or the radio playing, but in the past two plus years we have moved three times and the set up we had for playing music is still hiding in a box somewhere. We needed music in the house again. Our Holy Grail - an iHome for Mom's iPod.

We snuck it into the house, plugged it in and started playing music. I would say what happened after that makes my top ten list, if not top five, for most memorable moments in my life. You couldn't have taken the smile from my wife's face with a jack hammer and she danced. And danced. And sang. I almost cried. I had spent a great evening on a date with my kid and had the opportunity to bring the joy of music back into my house. If I had died right then and there, it would have been a life worth living. Call me glutenous, but of these moments....I want more.
Posted by Monkey Man at 5:01 PM 3 comments:

The morning sun peaks over the shoulder of a snow capped mountain. Rays of warmth kiss the earth. Coffee in hand we share the moment together. Lovingly. Silent. 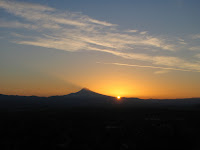 Posted by Monkey Man at 9:56 AM No comments: