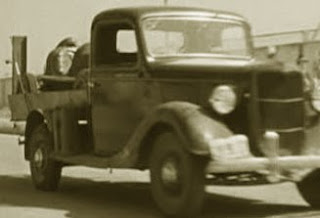 Days seemed like weeks.
Hours like days.
Minutes immeasurable.
The cold metal truck bed
had rattled her bones
so she thought she might never again
feel the steadiness of earth.
Yet she smiled
as she breathed in air
so sweet
it felt like heaven entering her lungs.
Eyes closed,
she willed the truck to stop.
_____________________________

What the Hell Wednesday - Speed Drying?

It was another week of tough decisions - "Man walks around naked to reduce stress" (Nope. Did naked man last week); "RCMP drinking before reporting to his post at a road block to catch drunk drivers" (No one would ever believe I didn't make that one up...but he was a Canadian!?!!); "Burglar falling through a ceiling into the arms of the cops" (Sounds like a tv sitcom - bo-ring); "Couple catches on fire while syphoning gas from a Salvation Army truck" (Karma strikes so copyrights will keep me from reprinting this); or the couple who broke into a home, then told police the did so in order to have a place to "make out" (Hmmmm, too late to the party and I'm trying to keep this blog closer to the PG side of the world....for now)

So the winner is the idiot who is caught driving like a wild man and must have had an app for lame speeding excuses. Here you are -

NAPERVILLE, Ill., (UPI) -- Police in Illinois said a man pulled over for speeding told an officer he was trying to dry off his car after getting it washed.

Naperville police said Lucas Wright, 24, was pulled over at about 7 p.m. Wednesday after an officer clocked him driving about 100 mph in a 50 mph zone, the Naperville Sun reported.

Police Sgt. Lee Martin said Wright offered an excuse for his speeding that no one in the department heard before.

"He said he'd just gotten his car washed and he was trying to dry it off," Martin said.

Wright was charged with a misdemeanor count of speeding 40 mph or more over the posted limit. Martin said the car, which was still wet from its recent washing, was towed and temporarily impounded.

Maybe he should have just stuck his head out the window and said he was also trying to dry his hair. What a dufus. The sad part about this story is that Lucas Wright probably was trying to dry off his car. I mean it takes brains to make up a story about why you are speeding, but this guy....I'm not so sure.

Can you just picture Lucas looking at his car after going through the car wash and saying, "Damn! It's still wet even after them air thingies blew all over it. Well, guess I'll just have to drive real fast to get the rest of that there water offa my car." Did you ever notice that all these guys seem to talk the same way? Wonder what that is all about?

Welllll...as we have all figured out, waiting for him down the road were the police who, as Lucas sped by at 100 miles per hour, said "What the Hell?" and the chase was on.
Posted by Monkey Man at 12:01 AM 19 comments: 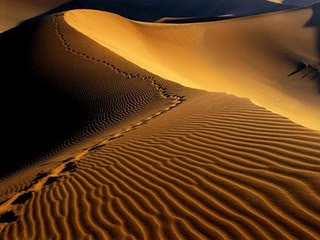 Stop.
Turn around and look back.
Whose tracks are those and where have they led?
Was there purpose?
Was it leaping blindly from one opportunity to the next?
Did the tracks circle aimlessly
or sink deep clinging desperately to a single spot?
Were tracks leading forward then back?
Did knees hit the ground in surrender or prayer?
Will the tracks of the past give direction for the future?
Look back to learn the wisdom of the tracks.
Let it lead forward.
Let it meander with joy.
The end is never known.
Love and cherish the tracks along the way.
________________________
Follow this link for more One Shot Wednesday poems.
Posted by Monkey Man at 11:26 AM 34 comments: 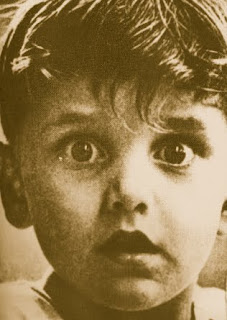 “Dad, why are trees dying?”

“Well, son, trees go into a hibernation mode
and chlorophyll begins to fade
leaving carotenoids as the primary pigments..."