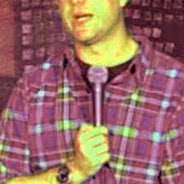 As my contribution to this week’s 55 session,
should I post some lame ass old joke
that I can only hope
no one remembers?
Or should l get deep
in creative thought
to come up with another original 55
with a wild surprise ending.
Well, shoot.
Here goes nothing….
”Did you hear the one about…”
_______________

Or if you want yet another challenge write a Sunday 160.
Like a text message, the Sunday 160 only uses 160 characters (including spaces)
Keep on schedule - post Sunday
Let me know you have posted via a comment on my site
Visit at least one other Sunday 160
Posted by Monkey Man at 12:01 AM 29 comments:

Theme Thursday - Camera: More than the eye can see

A tiny brass bell jingled as Jimmy walked through the door of the pawn shop alerting a small man bent over a glass display case that a new customer had just arrived. "Can I help ya?" croaked the gravelly voice through whiskey and cigarette cured vocal chords.

"I'm looking for a camera," said the young man whose bright eyes broadcast the excitement he felt as he closed in on making a life long dream come to reality. Without looking up from the case, the old man pointed a crooked, bony finger toward a shelf in a far corner. "Thanks," came a cheerful reply.

As he neared the shelf Jimmy's head swam with confusion at the choices that lay before him. Cameras of every size and shape. Simple point and shoot types. Polaroids. Complex digitals with so many buttons and dials, he wouldn't know where to start.

Then he saw it. Old and dusty but gleaming of chrome and black. It beckoned him. He knew this was the one. As he picked it up a light shock jolted him like the strong tingle of anticipation. There was a connection he had never felt before. He was suddenly empowered, but didn't know why.

"How much for this one?" he asked the bent figure of a man.

"Oh, that one I'll sell for cheap, just to get it out of here," he coughed out. "Even throw in a roll of film. Just be careful."

Satisfied with his new purchase but wondering what the old man had meant about being careful, Jimmy set off to play with his new toy and test his eye as a photographer.

Jimmy chose random subjects: a young girl in a brightly colored dress, happily swinging on a park's swing set; a teenage boy living his LeBron James fantasy on the basketball court; a couple kissing under the glow of a street lamp; a cherry orchard in full blossom; and a puppy playfully chasing its tail. As he took the shots he felt excitement, he couldn't wait to see the results of his photo excursion. Jimmy immediately took the camera and his film to a photo processor and anxiously waited like a child on Christmas morning.

When he went to pick up his photos, the clerk didn't said a word to Jimmy. She just gave him the photos, took his money and rushed away. Jimmy thought nothing of it and ran off to view his work.

Once home, Jimmy carefully removed the photos from the envelope to unveil his masterpieces. One by one he began to review his work. His smile quickly faded. The images he remembered were no where to be found. The people had aged. It was the girl on the swing but she was naked and swinging from a pole in a darkly lit room. His basketball player was on the court - with a needle in his arm. The couple was no longer in love as evidenced by her beaten and swollen face and his drunken, open mouth scream. The beautiful trees now only a desolate parking lot. Even the playful puppy was a lonely dog waiting for death behind the bars of a local pound.

Jimmy recognized his subjects, but not what the camera had seen. He was disturbed beyond belief. Crushed. He grabbed his camera and headed back to the pawn shop where he handed the camera back to the gnarled hands of the shop's owner and said, "It was just more than I could handle".

The shop owner cocked his head, looked at Jimmy and spat, "That's what the last guy said."
Posted by Monkey Man at 1:27 PM 27 comments:

What the Hell Wednesday - Is that you Jesus?

This weeks WTHW gives a break to the fine people of Salem, Oregon and has us travelling east to Darien, Connecticut, home of the seriously religious (or so this news article suggests).

DARIEN, Conn. (AP) -
Police said a naked man yelling that he was 'Jesus' was the catalyst for a five-vehicle accident on Interstate 95 North in Darien that injured three people and slowed traffic for nearly six hours. Police Sgt. Jeremiah Marron said officers responded to reports Saturday that a nude male was causing a disturbance on I-95. As police arrived, the man got into a car but police were able to pull the vehicle over.

Police said a tractor-trailer driver then slammed on the brakes to avoid another driver distracted by the highway commotion. The big rig jackknifed, careened into four cars and flipped over.

Rescue workers extricated the driver of the tractor-trailer.

The naked man's name was not released. It was not immediately known if he was charged.

What do they mean "The naked man's name was not released." He was Jesus! He shouted it to every passerby on the freeway. Or maybe he had a bee crawl up his pants leg while he was driving, had to pull over, strip naked to release the bee then ran around scream "Jesus" because he was so frightened by the whole experience.

A couple of details surprise me here. First, why are people slowing down to look? If I'm seeing some naked idiot screaming from the side of the road, I'm hitting the gas and getting away as fast as possible. Second, JESUS CAN DRIVE! That's pretty cool. I guess he has stayed in touch with the latest in technology since the crucifixion.

One thing is certain, everyone who passed this lunatic had to be muttering, "What the Hell?"
Posted by Monkey Man at 12:01 AM 10 comments:

They argued and fought.
Screaming at the top of their lungs.
Steam rising from their exhaled words.
This was not just ruffled feathers.
They were crows in heat. 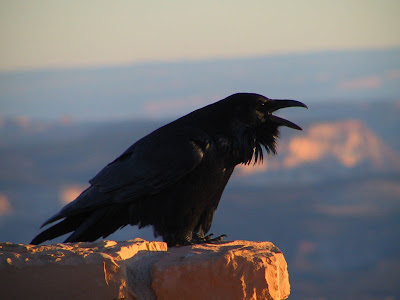