Back to Muddy Waters Cafe 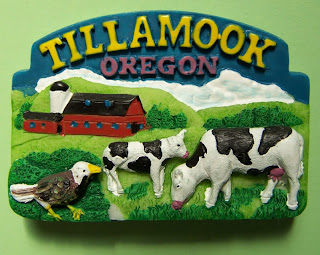 Since the Beach Boys enjoyed their breakfast so much at the Muddy Waters Cafe in Tillamook, we decided to share the heart stopping goodness with Mrs. Monkey Man (monkey sister couldn't get herself out of bed in time to join us). The six mile drive from Netarts to "downtown" Tillamook came with growling stomachs and great yearning for much needed coffee. Mocha for Mrs. MM and a quad espresso for me. Gotta have the caffeine in the morning.
Muddy Waters Cafe was not quite a crowded as it was Friday. I think there is a weekday work crowd that frequents the establishment or maybe they were just recovering from a tough night at the Tillamook County Fair where intake of elephant ears, corn dogs, cotton candy and other midway fare left no room for their regular morning stop and the hearty meal of hash browns, eggs and toast.
The family plopped itself down in a cozy booth with a view of both the street and kitchen. Once again, Judy, the MWC proprietor, was busy in the kitchen but not so busy that she couldn't yell a "Be right with ya" greeting. She served some folks at the counter and popped over to our booth with her cheery smile and warm attitude. Recognizing my son and me from the day before, she welcomed us back and was happy to see we brought in more mouths to feed.
As with the previous day's breakfast, Judy served us sinfully delicious comfort food - biscuits and sausage gravy, hash browns, a sausage omelet and lots of sides. When she came back later to bus our table - remember this is a one woman shop unless she has to call her sister in for help - Judy all but sat down to chat with us. The initial topic of conversation was the Tillamook County Fair and how her daughter and grandchildren were coming down from Portland to visit and catch the demolition derby - smashing cars is a big deal along the Oregon coast apparently. Judy's eyes absolutely lit up as she talked about her grandkids and pointed to the many photos of them on a pastry case near the kitchen.
We asked Judy where her daughter was coming from and it turned out to be very close to an area we used to live in - the Silicon Forest of the Northwest. Judy also filled us in on a bit of her history. She and her husband Keith decided to make Tillamook their "retirement" home and commuted to Tillamook on weekends to build their dream house. Keith was an engineer and Judy worked at Reeser's Fine Foods in Beaverton, Oregon. When they came down on the weekends they lived in a tent on their property and literally camped out while hammering nails and cutting lumber for their new home. A true do it yourself project through sun, rain and God knows what other type of weather comes out of the Pacific Ocean headed inland.
Judy cooked meals over a camp stove and they had only a rented porta-potty for taking care of business. It was all business for Keith and Judy until one night they decided to tidy up and hit the local Elks Lodge for dinner and dancing (Remember...this is Tillamook, Oregon home to more cows than people). While there they ran into a couple that came up to them and asked if they were the Tent People from down the street. This was the first of many friendships the Tent People from Portland formed with the locals. As she told this story, tears started coming to Judy's eyes. She apologized then explained that Keith - the love of her life, the man she said she waited 50 years for - had died just this last Spring of colon cancer.
Mrs. Monkey Man stood up and hugged Judy to let her know it was okay to feel the pain and express it. This was fresh and Judy was still hurting. It also hit very close to home for Mrs. Monkey Man, you see, I was only two years removed almost to the day from surgery to remove cancer from my colon and it had been less than eighteen months since I had finished chemotherapy. I was a survivor. Judy's Keith was not. We felt her pain.
Judy's story of love found and lost was tragic, but she is a fighter and is carrying on by being of service in the only ways she knows how - cooking, smiling and sharing her gratitude and love for life with everyone she comes in touch with.
We love you, Judy, and will frequent your establishment every time we visit Tillamook.
Posted by Monkey Man at 8:35 PM 2 comments:

This is dedicated to my most favorite person in the world.
Enjoy.
Posted by Monkey Man at 12:17 AM 2 comments: 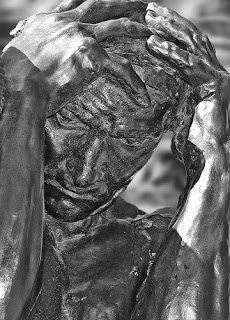 My head was pounding.
My eyelids were heavy with sleep.
The sickness enveloped me
as the world closed in with crushing force.
Clearly, I was suffering from CJS.