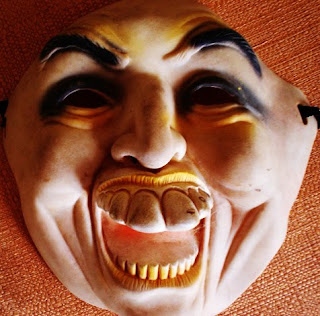 It arrived in a plain brown envelope
from an unknown source.
“That thing is just creepy.
Don’t wear it,” pleaded his wife.
“I think it’s cool,” he said
as he raised the mask toward his face,
“It will scare the heck out of the kids.”
Upon awakening naked and covered in blood,
he remembered nothing.
______________________

Like a text message, the Sunday 160 only uses 160 characters (including spaces)
Keep on schedule - post Sunday
Let me know you have posted via a comment on my site
Visit at least one other Sunday 160
Posted by Monkey Man at 5:00 PM 49 comments:

What The Hell Wednesday - Call the cops, this tastes nasty

Time for our weekly walk through the ingenious minds of petty thieves and criminals. I can't begin to tell you what I am learning about human nature by reading article after article from the depths of police reports. It's a good thing I have a sense of humor (thanks, mom) otherwise I would lose all faith in humanity and I'm here to tell you that faith hangs by a thread anyway. Check out this edited report by Jim McKinnon of the Pittsburgh Post-Gazette.

A Uniontown man Wednesday called police because what he believed was marijuana that he bought on the street tasted "nasty."

Now, investigators said, the 21-year-old man could be charged with possession of a look-a-like drug. He was not immediately arrested, and police declined to release his name.

The 'victim' reported that he had just bought a small amount of what he thought was marijuana and the taste turned him off, so he called police to check it for him, said police Det. Donald Gmitter.

Officers arrived at the man's apartment and found the green, leafy substance laid out on a table. The officers confiscated the substance after a field test kit used on the material was negative.

As dumb as the complaint sounds, Det. Gmitter said it's not nearly the first time someone has called to report being ripped off during the commission of illegal activity.

"We've had people call about prostitutes who, after they give them the money, they run away," Det. Gmitter said. "That's happened quite a few times."

The investigation is simmering.

Do you remember the old saying "Why do you think they call it 'dope'?" It sure applies here.

So I guess I should be surprised that someone stupid enough to buy fake pot is also stupid enough to call the police to check out it's "authenticity". What? You didn't smell it before you bought it? Next time take a whiff of the old stash box then a sniff of a few bottles on your spice rack and try to remember the differences. Cannabis. Oregano. Cannabis. Oregano. Get it?

What blows me away here is that not only did police take this very seriously by showing up to perform a field test on the 'nasty' substance, but they did it without laughing. At least that is how it's portrayed in the story.

I can just here the conversation.

Cop 1: "Nope, it's not marijuana. It appears to be a common kitchen spice."

Cop 1: under his breath "We should at least take it out to the squad car to put on our pizza. I mean, the guy did interrupt our dinner."

The other thing that cracks me up here is that Det. Gmitter (who has a vowel issue) actually had a frank discussion with a reporter about this type of report being no big deal. "Oh yeah, we get calls like this all the time. Usually some dude wanting us to chase down a hooker who stole his money. We just ask him to have his wife chase the hooker down to get his money back, to which the "victim" typically replies - What the Hell?"
Posted by Monkey Man at 12:01 AM 15 comments: