This is a Flash Fiction Friday 55
hosted by Mr. Knowitall.
For more 55's pay him a visit -
Mr. Knowitall.
_______________
A rhythmic pinging
was accompanied
by a constantly changing
digital display.
Numbers advanced
at an astronomical pace.
Blood pressure increased
with a dizzying upward spiral
until
Silence
followed by an out of body experience.
Looking down upon himself
from an other worldly state
he asked,
“When will these gas prices stop going so ridiculously high?” 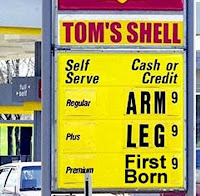 What The Hell Wednesday - More Heroes

I guess I'm just a sucker for hero stories. Especially when the story involves the "weak" knocking the crap out of some brazen idiot who preys on those he feels are lesser. Check out how this grandfatherly type made his point to a robber.
81 Year Old Man Thwarts Robbery With Frying Pan
JACKSONVILLE — A would-be robber got more than he bargained for when an 81-year-old Jacksonville man hit him "upside the head" with a frying pan.
Bobby Smith told officials he was working in his garden Saturday when caretaker Luvina Sones told him an intruder was in the house. Smith went to investigate.
According to an arrest report, the armed suspect knocked Smith to the ground and took his wallet. Smith grabbed the nearest weapon -- a frying pan full of fried potatoes. Smith hit the man, knocking some of his teeth out with the frying pan. He then used a nearby pitchfork to stick the robber in the side.
The bleeding suspect fled and Smith called for help. A K-9 unit found the suspect, who was arrested.
Bobby Smith is my new hero. Not only does he face the burglar but he gets up after being shoved to the floor and starts administering some old fashioned discipline to our "suspect". I think the only thing that might be suspect is that fella's intelligence. Maybe he should have tried picking on a grandmotherly type instead.
So Bobby, not caring that he is trashing his kitchen with leftovers, smacks robber boy with a (no doubt) cast iron skillet thus rearranging his dental work. Then stabs him with a pitchfork. A nearby pitchfork no less. Now, who keeps a pitchfork handy in the kitchen. My new hero Bobby Smith does. I think this could start a trend in home security.
Home security store guy - "Here is the hottest item on the security market today....a pitchfork with self contained hanger. Put it anywhere in the house and just stab those intruders so you leave a great trail for the K9 Unit."

This time I don't think it was the police who uttered that oft repeated phrase from this post, but the "intruder" himself. Upon feeling the poke of a pitchfork, Mr. Bad Guy most certainly said "What the Hell?"
Posted by Monkey Man at 6:36 PM 11 comments: 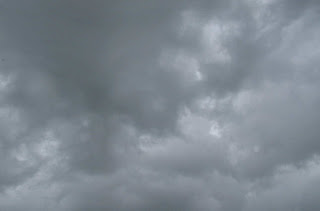