Can it hurt me? 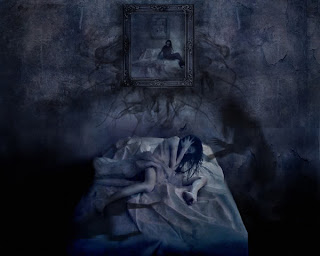 After having heard strange noises,
seen and felt entities
that were not of this world,
Lana decided to put up obstacles
to keep them away.
She hung sheets and blankets
from the ceiling at odd angles
to create a maze.
This seemed to keep them at bay,
but why was she now coughing up blood?

This is a Flash Fiction Friday 55.
If you want to know what the hell that means visit g-man.
The challenge is on.
______________
Or if you want yet another challenge write a Sunday 160.
Like a text message, the Sunday 160 only uses 160 characters (including spaces)
Keep on schedule - post Sunday
Let me know you have posted via a comment on my site
Visit at least one other Sunday 160 (if they exist)
Posted by Monkey Man at 6:35 PM 26 comments:

Boys will be Boys 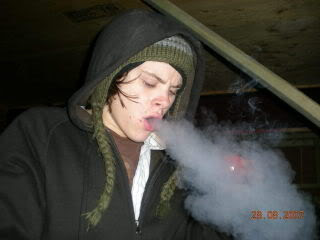 BERLIN, Germany - According to an Associated Press story, eight teenagers were hospitalized after consuming chili sauce in some kind of 'double dog dare ya' challenge (that's 'zweimal hund wagen du' in German). The sauce was reported to be 200 times hotter than your table top Tabasco which is a relatively mild 2,500 Scoville Units.

The stuff these kids were chugging was a whopping 535,000 Scoville units which for you pepper aficionados is the heat from the juice of a Red Savina Habanero pepper. One of the three hottest peppers known to man and almost a many Scoville Units as pepper spray.

Now here is the real surprising fact about this story - the teenagers were all boys. Okay, so that really isn't all that remarkable. When was the last time you read a story about teenage girls participating in some lame ass, dangerous and stupid activity, not counting the 'pregnancy pact' of 2008 or anything related to Twilight. What female is going to go along with a "let's see how close we can get to burning our insides out" challenge. I'm guessing....not many.

I will admit as a young man, er, boy, I participated in a number of pretty darn dumb ideas. BB gun wars were one such idea. Gather all the guys from the neighborhood who own a bb gun and head off into the woods to shoot at each other. The one thing we never did was go to our moms and say "Hey, Mom. Me, Tommy and Dennis are meetin' up with a bunch of the guys and are going to shoot each other with bb guns until someone cries." Nope. Moms never knew, injuries were hidden and head shots forbidden...we were dumb but deceptive.

What I want to know is - is it the Y chromosome? Is it the testosterone and all the wonderful accoutrements that come with it? Or is it just the underdeveloped mind of a teenager?
Posted by Monkey Man at 7:49 PM 13 comments: 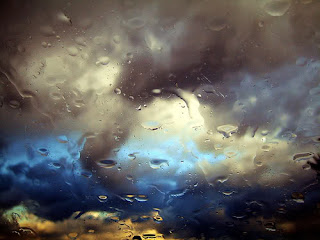 The audible rain
landed glancing blows
on all it struck.
Blurring vision
of an odd mix of
naked branches,
bowed fir
and skies
painted in hues
of gray,
blue,
pink and white.
Dusk called the clouds home.
They hurriedly dropped
their heavy wet burden
to hasten their trip
lest darkness overtake them
leaving only
echos of heavenly tears
on a black pallet.
Posted by Monkey Man at 5:21 PM 11 comments:

Brushed my teeth while the water ran,
splashed half a glass down the drain.
These luxuries we take for granted,
while Haitians stand in line for drinking water.

This is a Sunday 160. If you wish to take the challenge, here is a quick look at the rules. For the original Sunday 160 post click here.

If you want to help the victims in Haiti check out web sites for Medical Teams International, Mercy Corps, World Vision, World Concern, American Red Cross, World Food Program, CARE or check you local newspaper for listings. Since you are all very computer literate, I didn't create links to the organizations mentioned here. You are on your own. Help if you can.