The fastidious ritual
would give him
control over the destiny
of his hated rivals
and place victory
in his hands.
His wife thought
face paint looked ridiculous. 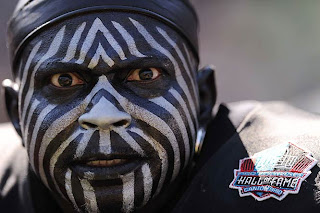 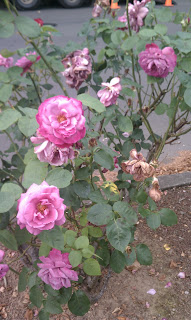 What The Hell Wednesday - Desperate for Friendship

You may have remember my other WTHW about Facebook - Facebook Felony - and while there have been other similar stories I passed on, this one was just too good to pass up. Check out what the Facebook "friend" addiction did for this creepy crook.


Woman Receives "Friend" Request From Her Own Stolen Phone
A Greeley man accused of breaking into a woman’s home and stealing her cellphone was arrested after he began texting one of her friends with the phone and even sent her a friend request on Facebook. Police said they used the cellphone signal to help track him down.
Juan Gonzales Jr., 22,was arrested Wednesday and is being held at the Weld County Jail on second-degree burglary and felony theft charges after a woman reported that she found him standing over her bed at 3 a.m., according to police reports.
When the woman screamed, Gonzales reportedly grabbed her cellphone and ran out of the house in downtown Greeley. The woman’s roommate reported to police that she, too, was missing a cellphone, a laptop computer and some jewelry.
The victim said the man was wearing a gray shirt and red shorts. An hour later, a friend of the victim’s began receiving text messages from the victim’s phone.
As police located the phone using technology from a cell tower, the victim contacted police. She had received a friend request on Facebook from a man named Duce Gonzalez.
The victim confirmed the man who friended her on Facebook was the same one who stole her phone.
When police went to take Gonzales in to custody, he was wearing a gray sweatshirt and red shorts — the same thing the woman said she saw the intruder wearing the day he entered her home.
_____________
Juan "Duce" Gonzales isn't just another dude addicted to increasing his "friends" numbers, he's just plain creepy. Found standing over the woman's bed at 3 a.m.!?! We all know what profilers say comes next, but I won't say it. I will just repeat...Creepy. Very, very creepy. Did I mention creepy? Or psychotic?

Duce didn't want to be called junior, eh? was also not very bright. Steal a cell phone and start friending the owner's friends on Facebook? and the owner? Duh! Woman sees you at the foot of her bed again creepy then you ask her to be your friend on Facebook? What were you thinking? Oh...right. Thinking isn't exactly something you do, is it Duce. Genius.

Apparently you also kept using the phone because the police just followed your signal and busted you in the same clothes you had on when you snuck into those poor girls' home. Perv. Creepy perv. Why didn't you just put a neon sign up on your roof that said "Creepy pervert who breaks into women's homes lives here." Well, no one ever said you were the sharpest knife in the drawer.

I can just imagine the look on your face when you were "ignored" by the people you had made friend requests of. I am sure you must have been so surprised by that fact you simply said, "What the Hell?"
Posted by Monkey Man at 8:54 PM 9 comments: