Reviewing my check list,
I ticked them off one by one.
Decorating, shopping, card mailing all done.
But something disturbed me.
Something was amiss.
Was it leaving out mistletoe and missing a kiss?
No, that too, was checked off
but what was it that remained?
Yes!
A Merry Christmas to blogdom
and new friendships gained.
_________________________

Or if you want yet another challenge
write a Sunday 160.
Like a text message, the Sunday 160 only uses 160 characters (including spaces)
Keep on schedule - post Sunday
Let me know you have posted via a comment on my site
Visit at least one other Sunday 160
___________________
I promise I will read your 160 and post a comment.
I will admit I'm lazy Sunday mornings lazy, so please be patient
Posted by Monkey Man at 5:00 PM 21 comments:

What The Hell Wednesday - Santa's Got A Gun 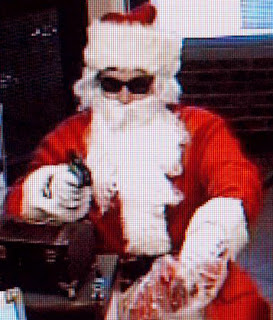 Somehow I just knew the seamy underbelly of America would come through at Christmas time with an appropriate Holiday story. So I proudly present to you the following as compiled by our dear friends at the Associated Press. Do they still have jobs?

EAST PROVIDENCE, R.I. - Call it a ho-ho-holdup. (no I didn't add this line....AP gets all the discredit)

Police say a man dressed as Santa Claus has robbed a Rhode Island yacht club. A bartender was alone in the East Providence Yacht Club Sunday night when a large man wearing a red suit, red hat, white beard and carrying a sack walked into the bar and brandished a gun.

The bartender fled and ran to a nearby business where she called 911. By the time police arrived, the Santa bandit - as well as an undetermined amount of cash from the register - was missing.

No arrests have been made.

I just love that last line. I am sure it is there to assure all the kiddies out there that Santa will still show up on Christmas eve and that he isn't waiting in the poky for the elves to bail him out.

Part of me wants to dispel this story as something AP made up just to use the "Ho ho hold-up" line and here's why....The bar at a yacht club is empty except for the bartender. I mean really. This is about as believable as the tooth fairy, Sasquatch and, well, Santa Claus. You've all heard the term "drinks like a sailor". No yacht club bar would ever be empty.

Now, then again, maybe this bartender is the guilty party. A fictitious character shows up (mind you a fictitious character renown for giving gifts and being friendly to all); pulls out a gun (jolly old St. Nick with a gun?); and steals cash? No one else is around to see? Soooo, who do you think the police should be looking for? The gun toting Santa (antithesis of what the REAL Santa is supposed to be) OR barely eking out a living bartender tired of ogles, stares and pinches from drunken yachtsmen. Hmmmm.

Regardless of who the actual guilty party is, I am sure once the East Providence police heard the bartender's story, they looked at one another and said (all together now) "What the Hell?"

On another note. I just got back from my annual check up at the doctor (no...not the full on glove treatment kind, just the let's chat and take your blood kind) and as I was waiting to have my blood drawn, I noticed the nurse looking at a small bottle. What got my attention was the label on the bottle. It looked like an airline size booze bottle with peaches on the label.

I asked the nurse what was in the bottle, to which she replied, "A urine sample. Strangest thing I've ever seen a sample come in." I promptly burst out laughing. Some idiot peed in this tiny booze bottle (can you imagine the mess that would make - the opening on those bottles are minuscule) that is probably unsanitized so he or she could try to pass a UA.

Can't you just hear it? "I'm sorry, sir (or madam) but you failed your urine analysis. It was quite high in alcohol content. Perhaps next time you night consider giving it to us in something different than a peach schnapps bottle." 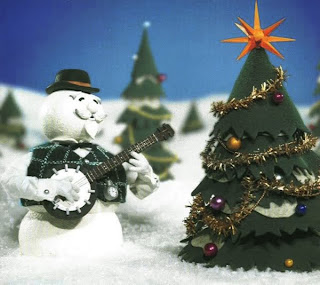 1. The Sunday 160 only uses 160 characters (including spaces).2. Keep on schedule - post Sunday.
3. Let me know you have posted via a comment on my site.
(Be sure to mention you have posted a 160)
4. Visit at least one other Sunday 160 writer.
____________________
There are certain songs that are just plain evil we love to hear at this time of year. Hear just a word or two and the song gets stuck in your mind for what seems like, well, forever.The blessed Burl Ives' "Have a Holly Jolly Christmas" does that to me....it creeps sickeningly into my head sticks....and since this is a time of year to be generous, I thought I should share. So I give this gift to each and every one of you. Enjoy and have a great week before Christmas.
Posted by Monkey Man at 12:01 AM 33 comments: