Looking for inspiration
in even the most mundane activities,
he was stumped.
A leaf holding for dear life
in spite of the wind twisting it from its branch.
Silver streaks of rain rat-a-tatting on a window,
obscuring the gray monotony beyond the glass.
For want of a 55 he strained his mind and got nothin'.
______________________

Like a text message, the Sunday 160 only uses 160 characters (including spaces)
Keep on schedule - post Sunday
Let me know you have posted via a comment on my site
Visit at least one other Sunday 160
Posted by Monkey Man at 5:00 PM 39 comments:

What The Hell Wednesday - Myspace now has bars

Have you ever run into one of those stories that makes you feel good about yourself. You know, the kind that let's you say "At least I'm not THAT bad off." Well, this is one of them. Seems a young lad in Florida has to have his Myspace access not matter where he is. Makes my blog addiction seem mild.

Teen Burglar's Myspace Gave Him Away

A Florida teen was arrested Sunday evening after deputies found a computer logged onto his Myspace account in a home that had been burglarized, according to the Monroe County Sheriff's Office.

The Sheriff's Office says a caretaker for the home on Sugarloaf Key reported the burglary. Preparing to remove hurricane shutters from a door, the caretaker saw someone sitting on the living room couch.

Deputies arriving at the house found no one inside, but they did find a back window open, empty soda and food containers, and some marijuana on a coffee table. The deputies also found a bedroom computer turned on and logged into the Myspace account of Robert Rupp, 18, of Big Coppitt Key, the Sheriff's Office said.

Rupp was found a short time later walking around the neighborhood with two screwdrivers in his pockets. Rupp told a deputy he had been in the house because it was cold outside, authorities said.

Rupp was charged with burglary, possession of burglary tools and theft.

How low can you go? Breaking into a home that was boarded up to protect it from a hurricane and living the high life literally like no one was ever going to come back. But back to my original reason for picking this story for my WTHW - Granted, I spend time reading and writing blogs. To the point that Mrs. MM says I should get a life. Just because she has one, doesn't mean that I should be forced to get one too.

This is where I can say "See! At least I don't break into houses to use their computers because I can't be away from Blogger for more than a few hours at a time. There are people out there with much worse problems.....really!" I know, she won't go for it, but it's worth a try don't you think? Okay, now I'm just trying to convince myself. So back to young Mr. Rupp.

I just love how he figures he's got a few days or so to make himself at home. Smoke a little weed. Eat some free food. Make use of free internet. Life was looking pretty good. Then....Creak....Thud....Bang....plywood comes off the covered windows and it's back to looking for another place to "get out of the cold". Cold!?! In Florida? What does that mean....65 degrees?

Jeez, fella, put on a pair of long pants and suck it up. Go to the library. Log on to Myspace and stay our of jail. Than again, there is no free food or smoking in the library. What a dope. He left the computer on to his Myspace page AND he forgot his pot. Bet he didn't even leave a thank you note.

One thing is certain. As police showed up and young Robert Rupp jumped out the back window, he was thinking to himself "What the Hell?"
Posted by Monkey Man at 12:01 AM 21 comments:

One Shot - Starting Over 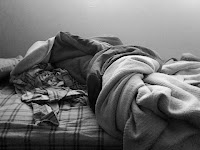 The cold penetrated his skin
with the shocking chill
of immersion in ice water.
Eyes squinting
to keep light
from making a new day reality,
he stumbled across the room
and brushed back
the heavy fabric curtains.
Through the cloud of dust
that exploded between him
and the window
he could see
only an oppressive gray sky
crashing with the weight of depression
down upon the world.
Shivering in disbelief,
he shuffled back toward the warm
inviting blankets of his bed
and thrust himself back in his cocoon
hoping if he tried again later
his world would change.
________________________

Follow this link for more One Shot Wednesday poems. 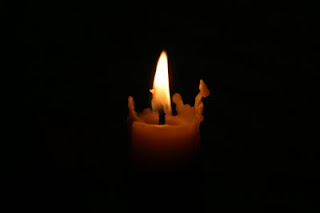 Friday night I was standing at the side of my bed talking to my wife. Our seventeen year old daughter opened the bedroom door and I saw blur of color come around the end of the bed and past my legs. Since it was only in the periphery of my vision, I thought it was our dog. When I looked down, nothing was there. I asked my daughter and wife if they saw the image. Both said yes. My daughter is convinced it is the ghost of one of our old dogs, but we did have an alter honoring my mother on All Souls Day...Do ya think?
Posted by Monkey Man at 12:01 AM 38 comments: