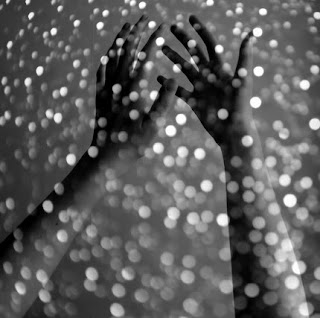 Can you thank someone who has made sacrifices and
worked until they dropped?
Handled adversity and taken care of the sick,
knowing all along they needed a hand to hold
or a shoulder to cry on
when none was available.
It may not be much,
but take my hand and accept my love.
You’re deserving.

This is a Flash Fiction Friday 55.
If you want to know what the hell that means visit g-man. The challenge is on.
Or Try my Sunday 160.
Posted by Monkey Man at 7:00 PM 14 comments:

When you've gone through surgery to remove cancer from your body and survived the chemicals they pump into you "just in case" there might be more cancer, you might think it's all over but a few simple blood tests. But nooooo. They still want to experiment with you.

Now some of it IS just the simple blood test, mixed with the usual blood pressure and stepping on the scale - every three months. Big deal - get poked with a needle and answers questions like, "Did you lose that weight on purpose?' To which you answer, "Yes, I was tired of being a lard ass and decided to add years instead of pounds."
But I digress, once a year they also want you to have what is called a PET/CT scan. I think the worst part of getting a PET/CT is not getting to drink your morning coffee, but that's another story. The first thing they do is take you into a holding cell and have you remove any metal you might be wearing - watch, glasses, the spare change in your pocket, your belt. You almost expect them to ask you to remove your shoe laces and walk over to the finger printing area (not that I have any experience in such things). Instead, you just get to lay down on a bed with wheels.
There you are laying on a gurney and nice nurse Natasha walks in with a needle that is surrounded by a lead shield. "What's with the heavy equipment around the needle," you ask. To which Nurse Natasha says, "The protection is for me not for you. Since I have to work with this stuff several times a day I'd grow a third arm because of the extended exposure without the lead shield. But please be reassured that injecting it into you is just fine." 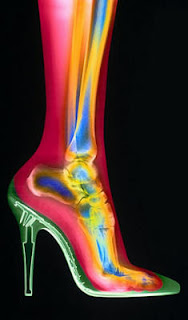 Great! So there they go - sugar coated, radio active isotopes injected into your veins. They then tell you to lie still for an hour while the radiation permeates every little blood vessel you have in you. What's the deal? Well, it seems cancer cells are hungry little devils and will gobble up the sugar that is injected - you see you have been fasting for 12 hours and for 24 hours couldn't eat any carbs (carbs = sugar) - and the sugar just happens to have these happy little isotopes along for the ride. So once the cancer cells have had their fill, they will show up in this scan as "hot" spots. These hot spots make Dr. Oncology very excited because he makes money from killing cancer cells. "Weeee," he says, "more cancer to kill. I can pay for my new vacation home in Brazil." Dr. Oncology loves topless girls in thongs.

Anyway, you lay there under a warm blanket bored out of your mind waiting for someone to finally come into your room and stick you in some machine that turns you into a bunch of little rainbow-like pictures. Lights low. Warm blanket. No coffee. Sleep happens. One could get used to mid morning naps, but employers frown on such things. As they would if you brought a Snuggie into work and twisted off the overhead fluorescents. Employers just don't have a clue as to how to relax. Didn't Einstein nap during the day?
After your nap a boy named Steve that looks as old as your teenage son walks in, tells you to take a last minute leak so his pictures are better. You fully expect what you release into the toilet will glow. He then wheels you into the room with the scanner. Once there, Steve tells you to lie down on this platform in front of the scanner, put your arms over your head and stay completely still for the next thirty minutes while the machine runs through its paces. Now, mind you, the scanner is barely wide enough to accommodate the width of your shoulders and has no head room. They could bury you in it. 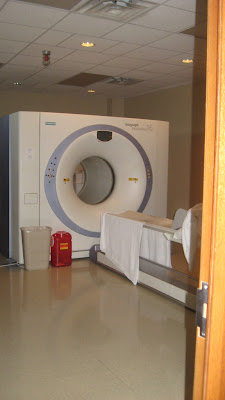 Have you ever been told something like - Don't eat the hors d'oeurves before the guests arrive - or - Don't squirm around or you will ruin my PET/CT pictures? Eating hors d'oeurves and moving around are all you can think about after that. You lay there as this machine whirs, clicks and moves you back and forth and all you can think about is that you have itchy spots all over your body - your nose itches, your ear lobe itches, so do your nether regions. It is as if the statement of "lay still" released an army of ants all over your body.
Then there is the whole arms over the head deal. Sounds like no big thing, but you try doing anything in a stationary position for thirty minutes and you, too, will become a big pussy. I don't know how those idiots on Survivor do some of the ridiculous stunts they are asked to perform. Of course they are playing for a million dollars instead of just being a wimpy whiner who wants to get the hell out of a motorized coffin.

Suddenly out of nowhere, young Steve's head is hovering over you and he says a polite version of "Pick up your stuff out of the locker and get out of here. I have people waiting for this machine." So you fill your pockets back up, put on your belt and head out to find the nearest barista knowing the results won't be offered up until Dr. Oncology steps away from his Brazilian Beach daydream long enough to explain the pretty pictures and, with a somewhat disappointed tone, tell you the cancer is still in remission. While this meeting won't take place until September 16 you already know all you have done is spent the insurance company's money and delayed Dr. Oncology's plan for the Brazilian vacation home.
Posted by Monkey Man at 5:09 PM 7 comments:

Try your hand at a caption on this photo. I was walking my dog in our neighborhood and happened on to this sign and couldn't resist it. Write your own caption in my comments and come back in a day or so. I won't post any of the caption comments until Tuesday at the earliest so you won't be swayed by anyone else's creativity....EXCEPT the caption I wrote which was sent to the lovely and talented Mrs. Monkey Man in a text pic.

Have fun and enter as often and you want.
I will also have a special prize for the winning caption. 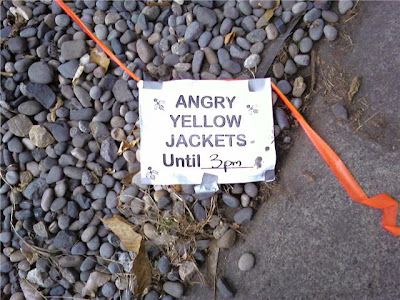 Happy Hour must start at 3.

The cigarette hung loosely from her painted lips.
"Got a light," she cooed in a voice
that would melt the coldest of hearts.
“Smoking causes wrinkles,” he said. 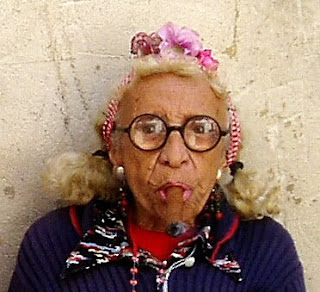