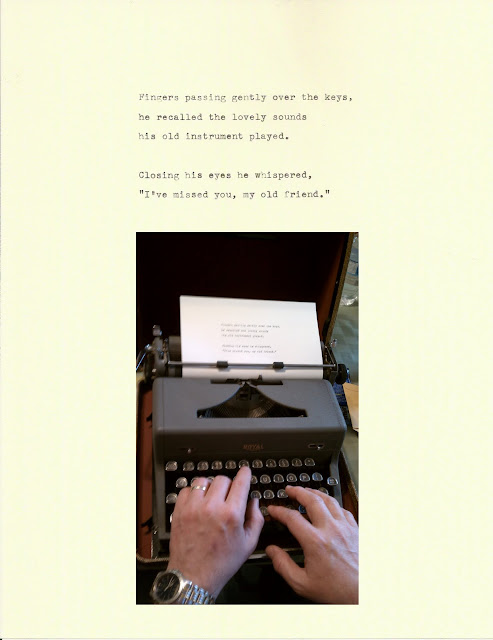 Mrs. MM found this beautiful "antique" on line and generously gave it to me as a gift. I had forgotten the wonderful sensory experience of typing on an old keyboard. The pressure, sound, even the musty odor of an old attic mixed with the slight smell of ink as keys struck the black ribbon. I hope this to be the first of many posts I will type in throw back fashion. No spell check. No easy cut and paste. Just raw "hand set type". Also, special thanks to Mrs. MM for scanning my typed paper and for taking and Photoshopping in the photo.

Delighted with my efforts,
I placed the final period
after typing my 55th word.
Proud as a parent of a new child,
I pulled my drop down menu
to properly schedule my post
for 5:02 PM
just after the G-Man
would open the gates
to shepherd in his ardent followers.
Then...
BOOM!
Blogger Exploded.
Shit!
_________________________
Even though G called off the day's event,
I still needed to vent.
So why not do so in the form of a 55.
Here's to Blogger.
Thhpppppbb.
Posted by Monkey Man at 3:21 PM 13 comments:

I really wanted to write this WTH on a Hispanic man who was wrongfully arrested for DUII and possession of 91 pounds of cocaine but the story was way too long and involved and as we all know, Monkey Man has no patience for that.

"But wait, Monkey! You can't tease us with a story about a wrongful arrest and just leave!"

Hispanic man had been driving cross country for 3 days to visit his sister. Woozy and exhausted from the drive, he was arrested because the police thought he was drunk. They were later proven wrong.


Cell Phone Butt Dials 911
LAY, N.Y. - An inadvertent 911 call led police to three larceny suspects overheard planning break-ins in upstate New York.
Onondaga County Sheriff said police, already looking for a suspicious person, got the unlikely assist when one of the men "pocket dialed" his cell phone's emergency number while driving near the scene of an earlier heist.
As a dispatcher relayed the conversation to deputies, the men discussed their plans, described their surroundings and even commented, "there go the cops now."
Walsh says that was enough for a deputy to turn around and stop the Kia Sportage full of tools stolen from a business in the Syracuse suburb of Clay. The dispatcher then heard the driver being asked for his license and registration.
The men arrested face grand larceny and stolen property charges.
First, a Kia Sportage??? What kind of self respecting criminals were these guys? Shouldn't they have been in a beat up 1986 El Camino or something? Serves them right for getting caught and put in the pokey. The police could have pulled them over for bad taste in cars alone AND without the help of the Butt Dial.
The Butt Dial. Ah, yes, the butt dial. Was this the hand of God at work? Nah, I prefer to think it was just Karma. These boys were going to get caught anyway, so they might as well have had a cell phone as an informant. I love how they thought they were so smart IDing the cops as they passed on the street.
"Hey! There go the cops. They'll never catch us. We is much too smart fer them."
Yup. Smart ass. Quit teaching your butt to use the phone and you won't get caught, dummy. I just love technology. Can't you see the expressions on the faces of these idiots as they were cuffed and place in a squad car. I am sure the owner of the cell phone, once told how the police located him, simply looked at his phone and said "What the Hell?"
Posted by Monkey Man at 4:10 PM 9 comments: