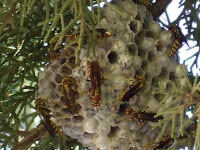 When you keep making the same mistake over and over again it is called insanity. Perhaps that is what it is called at its worse. One thing is for sure and that is that it is stupid.

We are supposed to learn from our mistakes. Sometimes it is human nature to stubbornly keep doing that same behavior or action over and over again expecting different results. But again that is nothing more than stupidity. Science, perhaps being the exception, since you must repeat an experiment any number of times in order to verify the validity of the results. But, come on, an individual's behavior isn't science.

When I was a child I lived at the edge of a small wooded area where the neighborhood kids would play....assuming their mothers would let them. I can remember one day enter that woods and seeing a very large wasp nest. I must have been nine or ten at the time. It was a beautiful hot summer day when even shorts and a t-shirt where too much clothing. On this particular day, I decided it would be a good idea to knock down that nest. But I was a smart kid and knew shorts and a t-shirt where no kind of covering for knocking down wasp nests, so I went inside to change my clothes. These "bees" didn't know who they were dealing with - a real smart kid who thought things through.

Out from the house I came on that hot summer day with boots, blue jeans, a long sleeve shirt, heavy coat, hat and gloves. I made up my best possible reproduction of a beekeeper's suit. A very poor beekeeper at that.

Poised in my beekeeper outfit with a very long and heavy stick I stalked back into the woods, up to the point where the wasps were buzzing around very close to me as they lit to and from their hive. Buoyed with confidence that I must have been invisible to the creatures in order to get so close, I crept closer yet until I know I would get a great big whack at their home. Which of course, I did....WHACK!!

Oh boy, now they knew I was there for sure and they were pissed. Off I ran back toward the safety of my house and I was fast. As I entered my yard and looked behind me I saw no wasps, clearly I had not only out smarted the brutes, but out ran them as well. Then I felt a slight bit of movement on my chin and lower lip. Up came my hand in that natural response to some foreign object being in your own personal space. No animal likes it when it is attacked - bees, wasps, hornets, dogs, cats, people - and it will usually fight back which this one did. Stung on the lip I was, as this lone avenger got his lick in for his tribe with his last dying effort. Ouch. Those suckers pack a punch especially in sensitive areas like your lips.

Well, from that I learned not to go knocking down wasps nest. Didn't take me more than once to figure out the results could be painful, not only to me but to others who then might pass that way and face the angry hive looking to protect their misplaced queen and home. I don't know if I was responsible for others being hurt, but it wouldn't surprise me.

Many years have passed since that experience, but I still find myself in situations where I could call on that memory and apply it in a general sense. You shouldn't have to repeat a bad or irresponsible behavior over and over to learn from it.

My goal is to move forward learning from my experiences and applying what I have learned in the past to similar situations as they arise. In my case, I need to stand up, be a husband, father and friend when needed and not run like a child being chased by bees.
Posted by Monkey Man at 9:30 PM 2 comments: