What the Hell Wednesday - Marked Men

Is it Wednesday already? Boy, I bet you are all just giddy waiting to find out what other kind of stupidity lurks in the minds of everyday man. Well this one is a doozie. Even though it was dated last fall, I couldn't resist.


OCTOBER 28--Meet Matthew McNelly and Joey Miller. The Iowa men were arrested Friday night on attempted burglary charges after a 911 caller told cops that two hoodie-wearing males were trying to enter his apartment. During a subsequent traffic stop (McNelly, 23, and Miller, 20, were traveling in a 1994 Buick Roadmaster), Carroll Police Department officers collared the men, both of whom had their faces painted. Police Chief Jeff Cayler is unsure why McNelly and Miller, pictured in the below mug shots, opted for the Sharpie marker look, but surmised that they may have been trying to intimidate the apartment's occupant. Or perhaps ski masks are a bit pricey. - The Smoking Gun 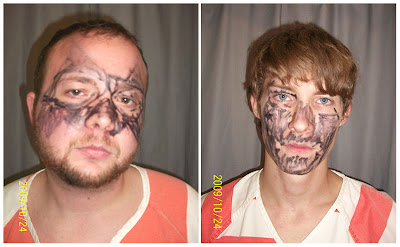 I love The Smoking Gun's humor. The way I see it, not only were ski masks too pricey for these high class citizens, but I am sure they would have no idea how to access a pair of hose to pull over their heads. Yup, these boys might have had a bit of trouble getting a girl...even before the Sharpie tattoos.

Can you imagine the conversation?

Matthew: We'd best disguise ourselves. What we got, Joey?

Joey: There lotsa garbage in the back seat. Beer cans, empty cigarette packs, fast food wrappers and a Sharpie I stole. Hey! Pass that joint back here. You're bogarting.

Matthew: Sharpie? We could draw on scary masks and wash later. No one will ever know it was us.

Mrs. MM thinks they did each other. Clearly the dude on the right was always envious of the other guy's beard so he inks one on - but up to the eyes? And what's with the second layer of eyebrows? Is this some failed Clockwork Orange make-up?

The other guy....Pumpkin head envy?? Was he trying to draw Charlie Brown's shirt on his face? Why didn't he try to add a little more hair? I can imagine their stay in jail was quite 'playful'. They certainly garnered lots of respect from their fellow inmates, who probably took one look at these two and muttered, "What the Hell?"
Posted by Monkey Man at 12:01 AM

Oh my goodnes...what a pair of geese!! Thanks for the laugh!

i barely recognize them...smiles.
that one kinda has a batman homage...

With burglars like these who needs stand up comics?

Charlie Brown shirt...I can definitely see it. Poor Charlie, what an insult.

The very first time I left our newborn son alone with the husband, he gave him a Sharpie mustache. I was not amused. It lasted an entire week.

I've heard it all.. this is unreal. Some people truly need psychiatric care or ....facilities.

Holy cow, this one made me laugh!!

It's not just the report I'm laughing at; but can you imagine the ridicule these two bozos will get in stir? HA!

Would've liked to be a fly on th' wall at the booking ;)

Hilarious! Give these boys a Darwinian Award!

Bwahahaha. I'm laughing so hard I have tears running down my face. What a couple of idiots. And your commentary cracked me up. I love these true-crime posts.