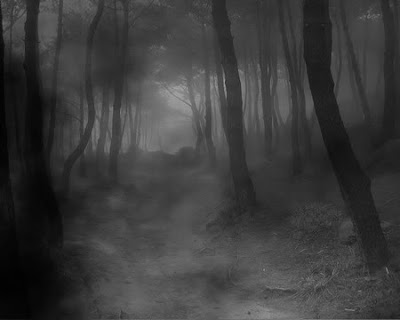 Every day since his forced retirement he walked the same path. He had come back from the war with anger and guilt. Then he found himself replaced by automation after 34 years with the only thanks he received being a pat on the back and a small union pension.

Even retirement dealt him a fist full of poor cards when his wife of 45 years died before he could allow himself to be happy with his new found time and he was then more alone than he had felt in his entire life. Loneliness and boredom. His love gone. His friends passed or out of touch. He fell deeper into a depression he didn't recognize or know how to overcome. His generation knew nothing of therapy. They pulled themselves up by their bootstraps and got on with life, no matter how miserable they were.

His anger at the cruelty of the world left him bitter and resentful. He walked in an attempt to let off the steam, but even this became painful as his once fit and toned body began to feel its age and fail him. Everyday, the same walk with only his animosity and shadow as companions. The walks seemed to leave an impression of his consciousness. His shadow tending to lead the way as his body struggled to keep up. The shadow knew the routine - 'round the casting pond, past the playground and duck pond with a stop at the lone willow next to the bridge over Crystal Springs Creek.

Same route. Same time. Daily. For years. Until he finally fell asleep and never woke up. 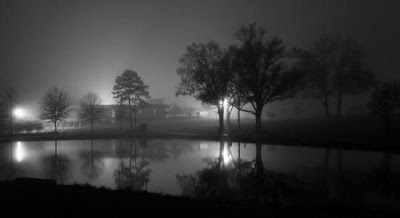 He was no longer physically taking his walk. Only his shadow remained to repeat the daily sojourn. A shadow so barely perceptible that only a glimpse out of the corner of one's eye might catch it. The man was gone, the shadow stayed. A ghostly apparition. Was it a lost soul unable to let go of an earthly attachment? Was it simply a shadow locked into the long established pattern looped through the end of eternity - neither ghost nor lost soul, but disembodied shadow doomed to repetition of long completed activities, yet still attached through the depth of negative or positive emotions delivered over the years?

What are these Shadow People?

Last summer Mrs. Monkey Man and I were walking through our local park. As I turned to cross a small bridge over the creek that fed a duck pond, I caught motion out of the corner of my eye. It appeared to be a silhouette of a man wearing a black hat and black overcoat. A closer look revealed.....nothing. No one was there, just a willow tree, motionless in the still afternoon air.

I shivered in the summer heat and shook my head. "What's wrong," asked Mrs. MM. "Nothing," I said. "I thought I saw a man in a black hat and coat, but there was nothing there."

We had both seen this shadow person. Neither of us had an explanation as to what it was. Where it came from or where it went. It was an eerie experience to say the least. We talked about it later. How was it that we were sensitive to such visions? She had seen them before, so had my son. This was my first. It was at once terrifying and intriguing. Were they all around? Do they protect as a guardian angel? Are they interdimensional? Was it just a shadow?

I may never know. But I do know what I saw and how it made me feel.
Posted by Monkey Man at 9:45 AM

Cool. I usually don't see them, but they make themselves known to me in many other ways.
There is so much more going on than meets the eye.
I hope you and your family have a great Thanksgiving. jeNN

What a beautifully written piece about a sad subject, and with such an interesting twist at the end. I'm glad you told this story.

My initial reaction was to say something funny. Like.....where's the dog? Sing to the dog! (Someone not familiar with your last post and the comments I made there would not understand).

But really, you and your family have this sensory perception that allows you to see what we cannot. I would just roll with it. Instead of being frightened by it, learn from it. Why do you have this ability and what should you do with it. There must be a reason. A purpose.

I am always looking for poetry and keep coming back to your writing. Fresh, honest, quick and deep. Thank you for writing, keep sending it out.

I have had something like this, but will have to get back in touch with it, nice evolution of the real into the unseen....

this all sounds real spooky. as for shadow people, they're everwhere. sometimes they show themselves, sometimes not. what they are, well, let your instinct guide you. it's done so beautifully through your story...

I love the story of how a shadow person becomes.

I've seen them since forever. They have many reasons for being here.

Have a Happy Thanksgiving if you celebrate and a Happy Thursday just to celebrate.Thursday Thirteen

They will wander until they tire of this place then they will sleep.

oh, delicious post. i too have seen the shadow people.

wild story. i totally believe you. never seen shadow people, but have felt their presence a few times.
HAPPY THANKSGIVING!

I would be terribly spooked by something like this...no wonder I have never seen them! Happy Thanksgiving to you and your family in your new home! I hope it is your best holiday EVER!

I would be scared if I saw them. I'm glad I don't.

Happy Thankful day to you and yours.

JeNN - We have had some very odd situations over the last couple of years. My wife and son are more seceptible to these experiences than I am.

EO - Just my spin on what the life may have been before it was only a shadow.

Matty - Our experiences in graveyards are verrry interesting.

Dianne - Are you sure you want to get back in touch with those feelings?

Shadow - a compliment from you is an honor.

Nessa & Brian - you will have to share your stories.

Mark - You may have something there.

Cameron - It was a very bizarre experience.

TK - Spooky it was. It is burned into my memory and never went farther than family until this post.

Momster - Almost as scary as where pumkin pie comes from.

Beautifully written piece MM. I so love the photographs too ~ what a compliment. The more visit, the more I learn and enjoy. You are a real talent.

I've seen and more often, "felt", shadow people. They've even appeared as actual shadows on the walls at night. I'm actually comforted rather than spooked. I feel they are guardian angels, perhaps my grandparents, checking in on me.

Hope you and Mrs. MM had a nice holiday today. "See" you tomorrow ~ perhaps in a shadow.

Karis - I've been SPOOKED first, then comforted. Monkey Man - that is one excellent piece of writing. Congrats on it.

MM ~ Beautifully written piece. I could "see" it. Will there be more to this story? hint hint :-)

Monkey Man;
I hope you get over to my site and use the search bar on the right and look up "shadowpeople." It's one of my favorite subjects. That was a brilliant post. I'm so glad you found my blog and I found yours!