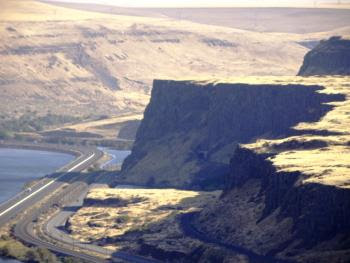 This last weekend Mrs MM and I took off to celebrate our seventeenth wedding anniversary. We travelled to one of our favorite little towns in Oregon - Hood River. We spent much of our early relationship in the area which is called the Columbia River Gorge. An area very dear to us both.

While we typically travel the area between our home town, Portland, and Hood River enjoying the hiking trails and waterfalls, we decided for our weekend away we would travel further east along the Gorge. It is still beautiful, but just not as green. Here in Oregon, we refer to this part of our state as the "High Desert" country. These are a few photos of the sites we took in.

We took off from Hood River and went about 40 miles east to the Mary Hill Museum. The museum was built by Samuel Hill, "the catalyst behind the Columbia River Highway", to be his eastern ranch. Due to issue of travel during that time period, the early 1900's, he ended up dedicating his home as a museum instead. 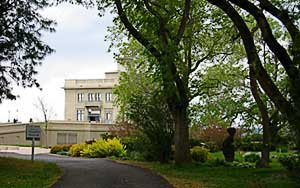 On a very park like grounds that is open to the public are a number of sculptures. Including the rather whimsical "Taco Bell", a bell hanging from a bar that has a sculpted taco on it. This was my favorite. 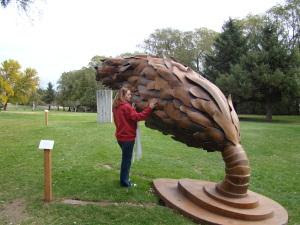 Mrs.MM with the Pine Cone. Inside the museum are collections of artwork from Czar Nicholas, Rodin, fascinating chess sets, painting on loan from various private collections and items that leave you scratching your head wondering what the heck are these beautiful works doing out in the middle of nowhere. 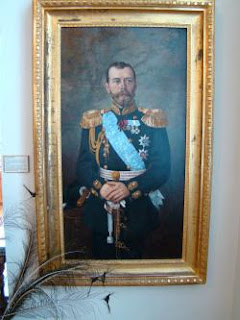 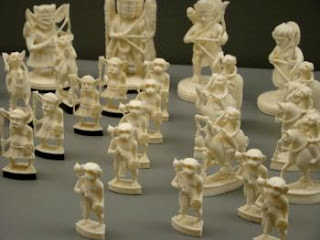 Monkey chess pieces...how could I resist.

Then beyond the Mary Hill Museum we went. 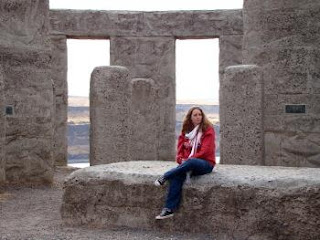 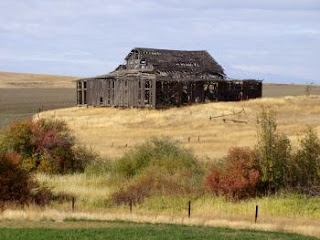 An old barn outside Goldendale, WA I had to shoot. And back to Hood River for a romantic dinner. (Mrs. MM hates sentences that start with And, but I had to do it.)
Posted by Monkey Man at 8:23 PM

And THEN he learned not to say AND at the beginning of a sentence. SHEESH.

Happy Anniversary. Your life gets better the longer you're together.

Nothing wrong with starting a sentence with 'And' or even 'But'. It used to be much frowned upon by pedants in the educational fields but it's common practice now.

And another thing: An enjoyable saunter with you and your beloved. 17 years eh? Mere beginners ... tee hee! We are exactly 3 times that number.

But never mind. Time flies and you'll soon catch us up.

And those photos! Just the ticket; that portrait of the czar looks similar to King George V of England. Maybe not.

Nice little trip for you both. And I hope the party mess was all cleaned up by the time you returned.

Love the pics and it sounds as though you had a nice getaway.

The windmills were a breathtaking sight when I was traveling out West. When there was a lot of open space, there were miles and miles of windmills. Something not seen in my neck of the woods -- CT.

Congrats on the anniversary.

Happy Anniversary! Your pictures are lovely (and so is your wife!).

PhG - You are sooo funny. I really can learn, you know.

Lakeviewer - It is getting better. Thank you.

Phillip - We like to call it our first 17 years together. Thanks for the inspiration. As for the Czar painting, a close up shows how it was repaired after being vandalized during the revolution of the time.

LMB - Thanks. A great time was has by all. As for the wind turbines, they do go on for miles and they are huge. Until you stand beneath them, you just don't appreciate how big they are. The idea of alternative power has great appeal to me.

Kyslp - She is beautiful. Thank you for your sentiments.

TK - Shhhh. It's a secret and you know how we are about anonymity ;-) It was the duplication of the photo wasn't it? Yes, I am verrrry lucky.

Sounds like a great anniversary jaunt. Congratulations on the big One Seven.