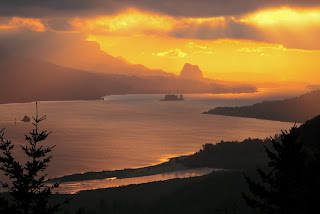 What do you do when you want to post something new but have no idea what type of topic you want to write about? Perhaps just a babble on, or what my daughter calls her random stream of conscience. So, here goes. Let's see if the ride is worth it.

I was lucky enough this weekend to spend time in one of my favorite places in the universe - The Columbia River Gorge. (It was also the topic of my Sunday 160 - Our Gorge. For those not familiar with the Sunday 160, just click here)

As a child, our family made frequent trips between Portland and Hood River, where my parents grew up and my grandparents still lived. We would load up car de jour which could have been anything from a mid 1950's Plymouth station wagon to a 1966 Olds Jet Star 88 to the 1972 Ford LTD and any number of others in between that I have long since forgotten, and head up the Gorge to Grandma's. The trip would always include ABC games where letters were taken in alphabetical order from any sign, license plate or vehicle; animal, mineral or vegetable guessing games; and singing. The songs were always the same drinking songs my dad learned in college.

Can't you just picture it - two children, one about five and the other almost nine singing "Drink beer. Drink beer. Oh won't you drink with me. I won't give a damn for any young man who won't drink beer with me....". Or "It's whiskey, whiskey, whiskey that makes me feel so frisky, on the farm. On the farm...". Or "Oh, the night that Paddy Murphy died, I never will forget. We all got stinkin' drunk that night and some ain't sober yet...". I had no idea what these songs were all about, but I got to say "damn" without repercussion. Pretty cool for a five year old. We sang those same silly songs into our teens because it was tradition. 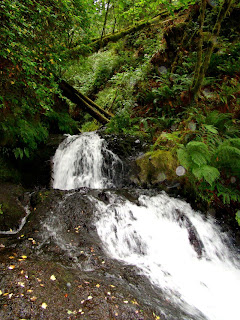 So went our drives up the Gorge to Hood River. Counting waterfalls, of which there were many, that we could see from the highway. Seldom stopping. Constantly observing. In the summer the river seemed immense and gleamed blue from the reflection of the clear skies above and the trees were filled with leaves. In the fall, the Gorge was on fire with the beautiful colors of the season. In winter when the road wasn't covered with ice it was green and white with the waterfalls hanging from the sides of the basalt cliffs like giant icicles and the waters of the Columbia frothed from the strong east winds. 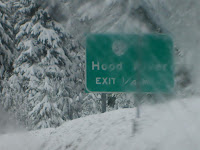 Followed by the the bloom to life of Spring when the hues of green ran from near yellow to deep forest green interspersed with blooms of dogwood and rhododendron. Simply spectacular.

At Hood River it was all about family. The town is much different today. Back then the main industry was the cannery that supported the apple, pear and cherry orchards in the area. My Grandmother worked on one of the lines that separated the "good" fruit from the "bad". My step grandfather ran a fork lift in the yard. My grandfather tended to his apple orchard and cattle. I first learned to whizz outside behind the barn from my farmer grandfather. Still mark my territory to this very day.

I loved being on my grandfather's farm. Setting sprinklers. Feeding the cattle. Setting traps for unwanted critters. Riding on the tractor. Feeding chickens. Being close to the earth had tremendous appeal. Still does.

Today, Hood River still has the orchards, but the cannery is long gone and the main industry is tourism that is supported by the great winds that travel the Gorge attracting wind surfers from all over the world. In the winter it is the proximity to Mt. Hood and world class skiing that keeps the town afloat. Great outdoor activities abound - camping, kayaking, trail biking, etc. - and the area is dotted with wineries and brew pubs. Work your ass off with some pleasurable outdoor activity then drink to your hearts content. What a world. What a world.

During the later years of my visits to Hood River another person, who I didn't even know existed was having similar experiences of family travels up the Gorge. Not to Hood River, but across the Columbia to Carson, Washington. As a little girl she was growing up with the same travel memories I had. What's that saying, oh ya, exactly the same only different. Family car trips. Singing. Waterfalls. The Columbia. The Gorge.

This woman and I met two decades ago and our first date was in our beloved Gorge. So it comes as no surprise when given an opportunity for a road trip we chose the Gorge. Lunch in Hood River, cruising the boutiques, people watching and enjoying the vistas and the touch of a hand. It was an overcast day with a bit of mist in the air, but that is part of the character of our Gorge. We even travelled back the the waterfall that was our intimate picnic spot on that first date. She's still breathtakingly beautiful....and so is the falls.

Today we have shared memories to go along with our individual memories of how we grew up in the Gorge. It is a true love affair - ours with each other and ours with the Columbia River Gorge. The three of us being forever linked. Our existences entwined. I am sure we aren't the only ones with this romantic link to such a beautifully scenic area, but that matters not. To us it is ours and always will be - Home.
Posted by Monkey Man at 6:00 PM

It's a wonder where the stream takes one when you get caught in the current. Nicely done MM