What The Hell Wednesday - What a Bunch of Bologna

What The Hell Wednesday has posted a number of stories that fall under the category of "This can't possibly be true", but I am here to tell you that this one is the topper. I only ask one question with this report - "Why?"


Bologna Smuggler Caught at Border
ALBUQUERQUE, N.M. -- A New Mexico resident has been cited after federal officials say he tried to smuggle 76 pounds of bologna into the U.S. from Mexico by hiding it in a spare tire.

U.S. Customs and Border Protection said last week that the eight rolls of Mexican bologna were discovered aboard a truck at an El Paso port of entry on Friday.
According to officials, officers detected an anomaly in the appearance of a Ford F-150 as it arrived at the Paso Del Norte international crossing port. Agents scanned the spare tire with a "Buster" density meter.
When they opened the spare tire, officials said agents found the bologna hidden inside
The driver was assessed a $1,000 civil penalty and was released.
_____________ 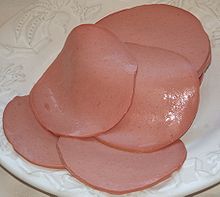 Really? Bologna? Oscar Mayer not good enough for you? Something extra special hidden in the Mexican bologna? Longer lasting than putting air in your spare? Why not just declare it?

Oh! You say you can't bring prepared meat from Mexico into the US? Then that must be some pretty tasty bologna. Or just cheap. Then again, it's not so cheap when it costs you a civil penalty of $1000.00 or $13,526.56 Mexican Pesos for those keeping track of the monetary exchange across the border.

But for me it just keeps coming back to bologna. Bologna? Do you know what's in that stuff? It's like a flattened hot dog. Does that tell you enough? It's finely ground "sausage" with lard added to it. Yup. Lard.

Can you just image what goes into bologna where processing plants don't have the FDA breathing down their necks? Makes me gag just thinking about it.

But I do get a real chuckle out of picturing the looks on the border patrols' faces when they open up a spare tire thinking "Huge drug bust....great glory for us" and they find.....bologna....76 pounds of bologna. There is no doubt in my mind they literally screamed "What the Hell?"
Posted by Monkey Man at 4:00 PM

The best bologna is Maple Leaf. Canadian brand, I do believe. So freaking good fried and served with potatoes and peas.

Never had the Mexican stuff, but it must be dang good to risk life and limb.

Personally, I liked that story that was on the front page of google today:

dude you are pretty hard up when you are smuggling bologna...wonder what the sentence is for bologna smuggling?

Got to admit...fried bologna and melted cheese. Yum.

I have "Bologna" (pronounced Baloney!) story from WWII, and a German P>O>W> camp.

Sounds to me like something else was hidden also--in the Bologna!

Yeah, I think these guys should just keep a lid on the story back at the office and say they had a lame night.

I bet they ate it all afterwards. Mmm... Lunchmeat.

Thank you for the laughter!

Would suck to try and explain that one.