What The Hell Wednesday - Poop or Pokey? 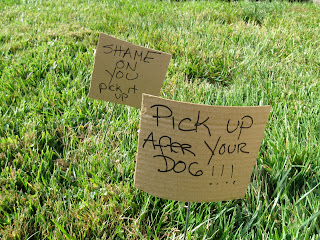 As some of you may know from my previous posts, I am a dog owner of course they really own you with all of their demands like - feed me, walk me, pet me, cover me up with my blanket because I'm cold so this story grabbed my attention.


Woman Charged After Refusing To Clean Up After Her Dog
MEMPHIS, Tenn. -- A Memphis woman who was adamant about not cleaning up after her dog in a park has been charged with assaulting a police officer, resisting arrest and disorderly conduct.

It all started when officers saw Kristen Anise Hall's pit bull defecate and watched Hall walk on.
When police told her she needed to clean up the mess, she refused and said she walked her dog there often and never scooped up after it.
When police asked for her identification, Hall is accused of kicking and biting an officer, according to the Commercial Appeal.
She was subdued with help from backup officers.
This story has me wishing I was there to watch this idiot get hauled away. I mean REALLY...should she just have been busted on stupidity alone? GOOD dog owners clean up after their animals. Hell, if I had a CAT, I wouldn't let IT go around "defecating" anywhere it wanted. But I would never have a cat - finicky, egotistic little hairy bastards. No one likes digging in a garden and coming up with those little dirt torpedoes. Ever have a sand box in your back yard???

Well, I digress. This is about little Princess Dogdefecationisokay. Jeez, idiotstick, play nice nice with the police and pick up the poo. But NOOOoooo, she's too good for that! "Why should I pick it up now? My dog shits here all the time. No big deal. It's biodegradable." No it's not, Princess! It carries diseases that can be transmitted to other dogs. It's a walking hazard. AND it stinks....just like your attitude.

I love that the report has to point out that the dog is a pit bull, like only an evil, vicious pit bull would crap on a lawn. But do take note that no dog attacked the police when Princess was biting and kicking. I own a pitty and he might love you to death, but he would never maliciously bite. Bad owners. Bad dogs. Regardless of breed.

The other reason for me posting this story is to remind all you dog owners to please pick up after your pup. That way you will never have to face a police officer who, as he rubs his kicked shin, mutters, "What the Hell?"
Posted by Monkey Man at 12:14 PM

seriously? does she really need to have the responsibility of a dog?

I'm really glad that you pointed out that her dog - particularly that it's a pit bull - did NOT attack the officer. There are dogs out there that are not generally nice - nor are they always pit bulls - that are nasty little bastards, so I would agree that it's the owner and not the dog. In this case, it was just the owner. Hell, I would have 'rubbed her nose it it'!
;-)

"But I would never have a cat - finicky, egotistic little hairy bastards." HA! I've got six. Ya want one?

Sounds like that dog needs a new owner. Stat.

I have a little chihuahua, with little poops. Of course I pick them up! Sometimes she poops twice on the same walk, and sometimes I am only prepared for one go...luckily I can use a leaf or other found object to scoop the poop. Now, perhaps we should step back and consider if that may have been the case. Anyway it is a good reminder. I can not imagine some woman taking a stroll in the park, with her dog, having to be subdued by backup officers. There must be more to this story...It is poop, people, just a little dog poop!

Although an animal lover - I am not a pet owner, though rightly pick up that they own us really!

When the brats were kids - we had loads of little furry things with tails of various sizes and things with fins too. Never a cat or dog.

Of course dog owners should collect poop - but clever observation about cats! Bad owners = bad pets - but this doggie seems to have risen above his owner!

This is a pet (no pun) peeve of mine also. Just amazing the owner felt so entitled. Jeez! Vb

I say we all come over to her place and take a dump in her yard and driveway. See if she can get around the piles like the people in the park who had to tiptoe after her.

I would just like to say to that poor, pitiful pup that has to live with the wench - "come live with me! I have lots of blue doggie bags, many in trunk and pockets and coats."

I'm sure he and Ez will get along just fine, when not fighting and bleeding and holding on to each other with their jaws of death. Or, they'll pee on each other and smile the way only a pitty can smile as they have a wild rumpus in the neighbors front yard, while I pick up after them. Yup.

I had to read it again to make sure I had it straight about which one was the dog.

I can't take my dog to the park unless I have a kid with me. Guess you can figure out why.

The way i see it is she is either too cheap to buy a dollar roll of dog shit bags or to lazy to bend over showing her Wal-Mart sized posterior or she thinks like her own her dogs shit don't stink.

I always clean up after my chihuahua when he poops at the dog park and inside Petsmart. He isn't much of a shopper.

That's the problem - some dog owner's are just careless and think 'well it's biodegradable' blah blah blah.... I live in an apartment building, and our neighbors below us have a fairly large dog. They. never. bring. him. out. So they use a wee wee pad inside. I think THAT'S the point of unsanitary disgustingness. I don't understand some pet owners...........

Just when you think that people can't get any dumber . . .