What The Hell Wednesday - That Steak Packs Quite a Punch 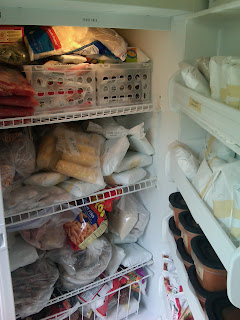 Now from the land that was the setting for the fictional comic book Swamp Thing and home to famed firearms designer, Melvin Johnson, thank you Wikipedia for obscure references we bring you a slice of life in Houma, Louisiana.

HOUMA, La. - Police in the southern Louisiana city of Houma say a woman upset over her lack of freezer space hit her boyfriend in the face with a frozen beefsteak.


Police told the local newspaper that 47-year-old Edith Tassin - also known as Edith Verdin - was booked with aggravated battery against 51-year-old Jerry Voisin.
Voisin called police on Sunday evening and told them Tassin was trying to cool a mixed drink, became upset when it woudn't fit in the freezer and hit him in the head with the frozen meat.


Police say Voisin was bleeding from the right side of his face when officers arrived.

Well now, I can surely understand getting pissed when you can't get to the ice in your freezer because it is full of meat. I think that old Jerry Boy should consider himself lucky he wasn't hit in the head with frozen gator or opossum or some other type of road pizza.

I guess what really gets to me here is that Edith has an alias. Any time you read a story that includes identification with an "also known as", you know you are dealing with some of Houma's high society. At least she maintained the same first name....then again, how creative is that?? Oh, I forgot for a moment - this is Houma, LA.

Is anyone surprised that alcohol was involved? I often fling a bit of frozen meat after I have downed a few. Wait, that's right, I don't drink any more because I found myself throwing frozen steaks and couldn't keep a relationship. Remember, boys, if you want to keep your woman happy - maintain ready access to the ice tray and hide anything that can be thrown way in the back.

Do you suppose the Houma police took the "weapon" to their barbecue evidence locker? Or did they just burst out laughing as they looked at Jerry "Meathead" Voisin's wound and utter that now famous line - "What the Hell?
Posted by Monkey Man at 12:54 PM

Not So Simply Single said...

Pretty funny... You refridge looks quite different than mine. I don't eat that much meat....from a cow that is...

Throwing a steak, now that is hilarious...giggle!

you know i can tially see this one going down...

Edith, in the kitchen, with the frozen steak

yup, sounds like the perfect addition to another version of Clue (the trailer park boys version)

Wonder if he is going to consider becoming a vegetarian?

that woman has quite a temper, huh?

Haha...I'm enjoying the comments almost as much as the post. Love the idea of a TPB version of Clue. Pure awesome.

Oh, and in my family the saying goes "Better than a kick in the ass with a frozen moccasin", so it's obviously a universal sentiment that nobody wants to get whacked with ANYTHING frozen. :)

Oh my gosh! When typing up medical reports on Thanksgiving, I typed up a report like that. An adult son threw a frozen turkey at his mother for not making a Thanksgiving supper. She spent the night in the hospital. The son spent it in a jail cell. The turkey? Thawing on the kitchen floor no doubt.

Hey this might make for a good movie script--maybe Alfred Hitchcock would direct it. Hmmmm?

Yeah, I'm not into meat flinging, however, if it interrupts my drinking sessions, I may just toss a filet or two across the room. ;)

Deb AKA Debra AKA Dee AKA ---etc. lol