What The Hell Wednesday - Suspicious Bagel??? 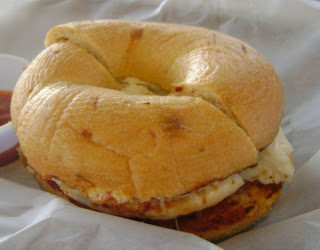 While this story originates from Florida and took place in Boston, it could have just as easily happened anywhere in the world where paranoia pulses through the populous like greed in the veins of a bank CEO. The story, written by Miami NBC correspondent Todd Wright, rises to the occasion and slices to the center of the real issue of Bagels on a Plane.

Florida Professor Arrested For Having A "Suspicious" Bagel On A Plane

A Florida professor was arrested and removed from a plane Monday after his fellow passengers alerted crew members they thought he had a suspicious package in the overhead compartment.

That "suspicious package" turned out to be keys, a bagel with cream cheese and a hat.

Ognjen Milatovic, 35, was flying from Boston to Washington D.C. on US Airways when he was escorted off the plane for disorderly conduct following the incident.

Monday's incident is another example of other passengers essentially becoming the authority on terrorist activity on planes.

Recently, passenger complaints have resulted authorities taking action against innocent passengers who went to the bathroom too often on a flight and who were just being annoying.

In the hyper-sensitive world of flying, sneezing too often could get you kicked off a flight and questioned by the FBI.

Milatovic, who is a mathematics and statistics professor at the University of North Florida, was minding his business when other passengers turned into super sleuths. Passengers reported hearing strange noises coming from a plastic bag. State police said later that the bag contained a set of keys, a bagel with cream cheese, some other small food items, a hat and a wallet.

When confronted by the US Airways crew about his "suspicious package," Milatovic got on his cell phone. The crew asked him to hang it up and sit down. When he refused, he was cuffed.

Milatovic was also charged with interfering with the operation of an aircraft.

What I think is the biggest surprise here is that NO ONE WAS DRUNK OR ON DRUGS!!! Isn't that amazing? This is just a case of busy bodies at work. Now I don't no what Prof. Milatovic looks like, so I can't say this was a case of profiling, but really...the jingling of keys being a "strange noise". Someone clearly has it in for people of Eastern European heritage. Or they just can't stand the idea of cream cheese on a bagel. Personally, I like a little schmeer.

I also love the list of other suspicious activities that can get you removed from an airplane - sneezing, peeing, being annoying - what's next making unnecessary eye contact? It's going to sound like the back seat of the family car every time you get on a plane. "He's looking at me." "She touching my side of the seat." "Are we there yet?" Passengers are now the authority on terrorist activities and the REAL authorities take them for their word. Crazy.

But what kills me is why does the professor make a cell call when all he had to do was politely ask them to look into the bag so they could see the contents where harmless. Prof was just as guilty as annoying rat, tattle tale person who started the whole bomb bagel rumor to begin with. "But I could have sworn the cream cheese was C4...REALLY!!"

I can just picture the bomb squad carefully taking the paper bag off the plane, opening it up to find a bagel and bunch of miscellaneous personal items. They probably rolled their eyes and said "What the Hell?"
Posted by Monkey Man at 2:58 PM

Really. What the hell? No lox on that bagel? Definitly suspicious.
;-)

lol...perhaps the person was lactose intolerant and was afraid they might get slapped with a piece of cheese or...nah...just stupid...

Guess I'll stop complaining about being searched. Me, a short, hispanic lady - how suspicious can I be? But at least I had no bagel.

Seriously, I would rather get blown up than live my life worrying about what the guy next to me has in his bagel bag.

"this is for our safety" :D

Brilliant post! You had me laughing so hard, my wine almost spewed from my nose (that would have gotten me kicked off a flight). What I don't get is why don't they harass the men who harass women on the seat next to them, or how about ones who drink 5 drinks? Hmm... When the hell are we going to have high speed trains? I don't ever want to fly again. It's like the worst punishment in the world.

The whole thing is rather suspicious. Whats in a name? So we cannot assume here it was by appearances can we? A stats professor well that explains the quirky behavior with the cell phone, all my stats prof's were quirky eccentric, nice but .... Still an over reaction from other passengers, that I find disturbing, is this sort of thing common in Europe airlines? they have been at this longer then we have I don't recall this over reaction there?

Good points. Honestly, I'm not even American and I'm tired of every news story being about this.
And now I'm craving a bagel.

a suspicious mind doesn't need a lot of prompting to find something suspicious.

None of the silliness reduces terrorism or improves the safety and efficiency of travel, of course.

I'm with 00dozo on this one.... no lox. That's just wrong!
And what flavour bagel was it? If it was plain t clearly wasn't for eating! :)

There is a good possibility that his English skills were not up to par with the situation or that PhD. (he thought) trumped their curiosity. And here you have so eloquently stated ANOTHER reason I will never fly any where again.

Peeing really? I guess the next time I am on a long flight, I better wear depends. Those were funny.... hum, a bagel would go good with my coffee right about now.

I hate flying. It brings out the selfish in everyone. This is beyond ridiculous, though. And like you said, if he'd just calmly asked them to check the bag, all of this could have ended so differently. Making a cell phone call instead was NOT a good choice. I watch Mythbusters. They labeled the myth of cell phone causing plane crash busted, so no harm done, but it's clearly in violation of rules which he should have had the decency to follow.

I don't know. . . I think you might be dismissing this too flippantly (if it's not a word, it should be). I have often been suspicious of bagels. Not as often, of course ,as English muffins, which are just innately dangerous, but less often then say, rye toast. You can't be too careful when it comes to breads and bakery goods.

I don't know. . . I think you might be dismissing this too flippantly (if it's not a word, it should be). I have often been suspicious of bagels. Not as often, of course ,as English muffins, which are just innately dangerous, but less often then say, rye toast. You can't be too careful when it comes to breads and bakery goods.