What The Hell Wednesday - Stupor Hero

This week we find ourselves back in the beautiful Pacific Northwest where bumper stickers like "Keep Portland Weird" and "Friends Dont' Let Friends Drink Starbucks" proliferate. Self proclaimed independent thinkers all.

Well, it appears the home of Grunge has started a new craze - Superhero Mania. Check out this story as taken from a European news source.


The masked crusader, who likes to call himself the Guardian of Seattle, got into a little local difficulty and had his nose broken while trying to protect his beloved city.
And the incident has prompted police to urge him and other self-styled saviors to hang up their capes before anyone gets seriously hurt.
‘Does Superman get his ass kicked?’ one detective – quite fairly – asked. ‘These people should not be called superheroes.’
Phoenix Jones – who parades around wearing tights, a mask and a skin-tight rubber suit with a bulletproof vest – was hurt while bravely (or stupidly) trying to break up a fight with a man who was armed with a gun.
But he insisted his injury won’t put him off fighting crime.
‘If police aren’t here, criminals feel free to run wild in my city,’ the father of two said. ‘And I’m not going to stand for it.’
Mr. Jones insisted he endangered his life ‘with a reason and a purpose’ and claimed he and other caped crusaders all had a military or martial arts background and knew what they were facing.
His eight other colleagues revel in the monikers Thorn, Buster Doe, Green Reaper, Gemini, No Name, Catastrophe, Thunder 88 and Penelope.
He is often driven around the city by a mystery woman; she doesn’t bother with superhero garb.

Just what we need....another gang. I mean really, that's what this equates to as far as I'm concerned. "Wait! Why so serious, Monkey?," you ask. Okay, you're right I'll lighten up and get back to my usual sarcasm. How else can I get that feeling of superiority?

First, what is the difference between vigilantism and Superhero behavior other than insanity wearing a costume? There are a bunch of these idiots vigilantes losers 'superheroes' running around, not just Mr. Jones....I love that. And did you check out those names??? Does Thunder 88 hit people with his piano? Does Catastrophe wear a mounted feline backside on his head? Get it 'Cat-Ass-Trophy'. Then there's No Name who doesn't include creativity among his not so super powers.

But don't worry about these guys and gals, they have backgrounds in martial arts and the military which makes them impervious to bullets and knives or whatever else real criminals have in their arsenal. Reminds me of the movie Mystery Men or that not so new flick Kick Ass.

The story says that Jones has two kids. Can you imagine the first time Daddy shows up in the living room wearing the costume shown in the photo below? Those kids must have looked at each other and said "What the Hell?" Upon which the Guardian of Seattle promptly washed out their mouths with soap. 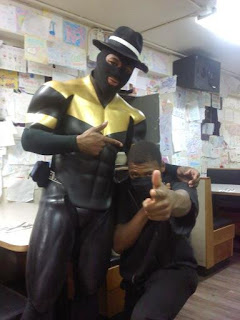 This story disturbs me more than many others you've posted, and I'm not sure why. Maybe because most of the WTH losers kind of find themselves in a muddle created by a lack of forethought...and these guys have put a WHOLE LOT of forethought into their actions. They have costumes, for pete's sake. That's just not right.

I just like to send you my love and to say thank you for your friendship. It has been a pleasure!

I am leaving my blogs for good. Just like to make some last stops first.

i need to find the website...there is a whole group of these self styled superheroes....craziness...

(Deep voice). Hello. This is Superman speaking, ad I approve of this ad paid for by ygdshl mgjl; rd etc.

Usually I travel as my alias, Steve E, a weak, milquetoast, violin-playing dude who tries to act normal...but not too much!

You raised some nice daughters, the baby and the 18-year-old...OH!, they are the same "Daddy's Little Girl"!

Holy Moly! Just last week my husband sent me an article from the UK's The Sun about Seattle's Phoenix Jones, the Superman of the People.
I don't know how I feel about it. Yeah, it's crazy to have non-supers out there trying to be super heroes, but the fact that they are out there trying to make the world a better place is sort of, well, endearing. They're nuts and weird, but they are out there trying to make a difference. Right?
Ignore me, though. I'm a comic book geek. I used to fantasize about becoming one of Professor Xavier's gifted few (X-men reference). Unfortunately, I'm still waiting for my super-mutant powers to manifest. I will not be out there saving the world from crime and evil without a decent super power and kick-ass costume to protect me.
Thanks for blogging this story. I very much enjoyed it.

Seattle is getting weirder then Portland...


Why shouldn't I let my friends drink Starbuck's?

"parades around wearing tights, a mask and a skin-tight rubber suit"

In my neck of the woods, that's just begging for an ass kicking.

What about when daddy gets a bullet???

Stick to your java Seattle

Ok this guy is too old to tie a towel around his neck and buzz around Seattle.

It's sad tho if the police aren't keeping crime down

I'm sticking with Batman, Spiderman and ummm Wonder Woman or have they all retired. You know the real crime fighters. "a broken nose" gees... loser but good story

Sounds like all the bats are not in the Batcave up in Seattle...

wow..and I thought that was only for those not so funny comedies they try and show at the theater...

Ok, so I'm not that invincible!

He'd be more of a hero if he stayed home and raised his children with sanity.

Haha! This is fantastic... it's a brave new world out west isn't it? In New York our psychos just mutter to themselves and beg for money...