What The Hell Wednesday - This Stinks 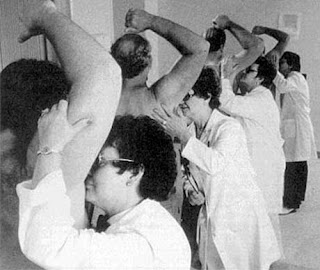 When it comes to the unusual, I just can't resist, and this theft doesn't just teeter on the unusual, it jumps right off bizarre bluffs. I mean, if you're gonna steal....make it worth while. Or make it worth me having a great time making fun of your stupidity. So as read in the Athens Banner-Herald.

Store has second deodorant theft in a week

Police in Georgia said a man attempted to steal several deodorant sticks from a pharmacy that was struck by a similar crime a week earlier.

Athens-Clarke County police said the man was caught on a security camera fleeing the store Friday with nine sticks of deodorant in four varieties stuffed into his cargo pants.

Police said the incident took place exactly one week after employees stopped a woman from stealing 12 deodorant sticks from the shelves.

Police were searching for the latest thief.

OKAY then. Stealing deodorant. If he needed it that badly, I am sure bloodhounds would have no problem following his trail. But then again, maybe it's not him with the odor issue. Maybe it's his family and he is just tired of having to put up with the smell. But nine sticks? That's either a very big family or a very big smell.

Apparently each family member has discerning tastes in deodorant - nine sticks in four varieties. This must have made for interesting conversation once the thief returned home.

Thief: "Alright, everbuddy, I went and picked up yer deodorant. Now maybe you kin stop stinkin' so much. Billy Bob, I got yer Old Spice stick right cheer and I is sure it will make you all muscly like the feller on them commercials. Daisy May, my sweet little flower, now you kin stop smellin' like them pigs. I got ya Dove 'cause I know how you likes to eat them little critters. An' Ma, I got that there Right Guard fer ya, since yer built like a guard. The rest of ya's kin just fight over what's left."
Okay, I know what you're saying "But Monkey Man, the thief is from Georgia and you have him talking like some Kentucky Hillbilly." Yes, that's right I do. I guess it's just easier for me to type "Jethro" than "Nascar". So tough knobs if you don't like it.
Oh, one more thing - This was the second deodorant theft in a week!?! Do you think they might be related? Or was there just a bit of a warm spell in that area over the past couple of weeks that had folks sweating up a storm?
At any rate, can't you just see the puzzled looks on the security guys as they watched this doofus jam deodorant into his pockets, glanced over at each other and said "What the Hell?"
Posted by Monkey Man at 12:01 AM

:P that was funny..yeah either that or a lot of smell

That man was Kentucky , who recently settled in Georgia with his stinky family! :D

I did enjoy that, lol... I think someone needs to introduce them to a bathtub and soap as well if they stink that bad.

Well, if he added soap to the thievery I could forgive him. Now, I'm thinking he's just covering up his stink and not attacking the root of the problem. Just like a man!

too early for stocking stuffers;-) or is it? hope you have a wonderful Thanksgiving!!c

Sadly I have to side with the thiefs in this particularly case. There's nothing I hate spending my money on more than toileteries. You put the pitstick on, and that's it. There's nothing rewarding about its purchase. It's not like you can watch it, hang it, or ride in it. It ranks right up there with buying toilet paper. I bet you see that news clip next: Thiefs abscond with 12-pack of TP.
Love from the Pimpin' Bee-otch!

First, that picture makes me want to throw up in my mouth a little- what a dream job ;) and second, I cracked up with your comparison between Kentucky and NC! Thanks for the pre-Thanksgiving laugh

If you think You stink
Shawn

Is it possible to manufacture meth out of antiperspirant now?

Eww, that pic makes me gag.

Insane! I bet that's the second deodorant theft EVER.

Hey! Consider yourself awarded by Fay's of Life

What do you want to bet they have found a new way to make meth with it?