Back from the cold 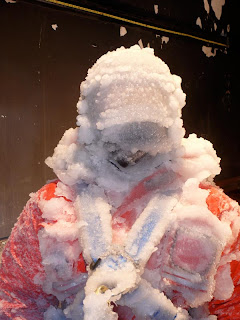 Upon my return from my company's week long "International Sales Meeting" (big deal, we have a facility in Paris and an office in the UK - the rest of us are pure Americana) I have had little time to read my favorite blogs, let alone write. So just to torture you all, I am going to vomit a technicolor recap of my missing week. Random and self serving. Read on if you wish or leave now while you still can.

First and foremost, our meeting took place in downtown Minneapolis, Minnesota. No big deal you say? Well, for a Northwesterner whose winters average just over 50 degree days, it is a very big deal. Temperatures were in the single digits with wind chill to the minus whatevers. Fortunately, our meeting was indoors and Minneapolitans (?) were smart enough to build their city with so many covered sky walks between buildings that you really didn't have to experience the cold.

But COME ON....we have offices in Las Vegas and LA. What the hell is wrong with meeting in a warm weather locale? Jeez.

Day One - Just kidding. This was a sales meeting run by operations, so if I gave you the daily blow by blow, you would never read my blog again. Let me just say I was pleased to have been able to stay awake during the hours of mind numbing power point presentations as dry as a 90 year old virgin's....and if I hear one more person say, "Let's take that discussion off line" I may become homicidal.

So the highlights included the way we were fed. That first night we had dinner at Fogo De Chao, an authentic Brazilian Steakhouse. If you love red meat, it was paradise. 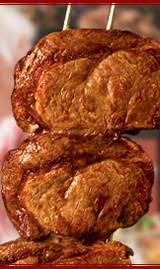 And I love red meat. Picanha, Alcatra, Costela, Fraldinha, Beef Ancho plus lamb, chicken and sausage. Man, I wish there was one on the west coast closer than LA.

I spend a little time on the road, but not as much as some sales people and usually not a week at a time, so I had time to rediscover what I like about extended living out of a hotel room. No having to put the toilet seat down. Someone else made my bed. No commute. Room service at the company's expense. No running out of hot water in the shower. No sharing a bathroom. No cooking or cleaning up dishes.

We also got the results an assessment of strengths and weaknesses test that was taken months before this little party. Of course, I came out as an analytically heartless bastard whose greatest desire is that you know nothing about me. Pretty spot on, I'd say. Mrs. MM took the test upon my return and she is completely the opposite of my result. She is a human being with feelings and creativity. How she stays with me, I have no idea. I'm just lucky, I guess.

Other highlights - Got to go to my first NHL hockey game in a corporate suite. Minnesota Wild versus the Detroit Red Wings. A 5 to 2 win by the Wild. I was rooting for Detroit. I tell you what, that is a fast and furious sport. I was impressed by these athletes and the pace of the game. If Portland had a real hockey team, I would go watch. My big disappointment - no fight. I think there might have been some kissing on the ice. Get with it boys. Hockey equals fighting. Let's have some animosity here. We also walked through a park in downtown St. Paul filled with beautiful ice sculptures. An amazing show of creativity and near frostbite.

So now I am back and am trying to catch up but the back log of blogs is hopeless. Guess I will just start over beginning today. I hope to get back to leaving my sterling and witty comments. I may even write a sentence or two.

Missed you and I'm glad I am back in from the cold.
Posted by Monkey Man at 6:23 PM

welcome back! sounds like you had some fun times along the way. that pic is oddly fortelling of the weekend we are about to have...again..

Dude Detroit hasn't had a real fighter since Bob Probert. They have fine tuned hockey now so that most of them would rather skate away than drop the gloves.

I do feel for you though Minnesota at this time of years is not for the faint hearted but it probably matched the corporate heart perfectly.

I don't know how my relatives survive those winters. I'm so glad my folks moved to California after my dad knocked up my mom with my sister when my mom was only 16. Those winters in MN. would kill me. California spoiled me and now I piss and moan about freezing temps for the low. Any single digits with minus whatevers would kill me too. I'm sure of it!

The highlights were sounded pretty good! Good meat and when I read:
"Someone else made my bed. No commute. Room service at the company's expense. No running out of hot water in the shower. No sharing a bathroom. No cooking or cleaning up dishes." Made me think, "Damn, I need a vacation!"

Glad you're back. Missed you!

s/b The highlights sounded pretty good. Don't know where the extra were came from.

Glad you are back. Sounds like it wasn't too hideous a business trip.

13 Characters from Rose and Prince Brendan

Funny that you update us today. Just last night I was thinking that I haven't heard from the MM lately. Glad to hear you're back on board. But as for the tests......opposites attract.

welcome BACK from the freezing!
I have to say it is a very very odd decision to have a meeting in MN when you have offices in sunny places. I feel for you, when it's that cold all you really want to do is SLEEP and stay warm!!!!!!

Poor thing! Your corporate vacations/missions are spooky and heartless. Don't worry, wait until you reach the top tier. You can give yourself bonuses and missions to Mexico all at the right seasons.

Good to have you back.

because of your sacrifice there are sales people throughout the world regaining the feeling in their bodies and brains--myself included... we are no longer zombies and free of the dreaded sales retreat syndrome..we thank you-c