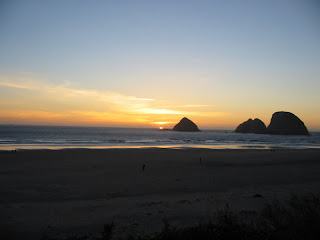 This weekend the whole damn clan went on a road trip to the Oregon coast. My son and I left Thursday evening to get a bit of extra testosterone time before Mom and sister arrived on Friday night. We also took the family dog so he could acclimate himself to the new surroundings and not be a big, whiny pain in the ass when the girls showed up. Fat chance there was of that happening...the bigger they are the louder they whine.

Our first day was a real experience in small town, down home sensibilities and courtesy. We drove to breakfast and ate at a little diner named Muddy Waters Cafe in Tillamook, Oregon and it is a must for comfort food. When we showed up the three booths and one table were full so we walked over to sit at the counter. There were five stools, three of which were taken and the two remaining weren't together. A woman seated at the counter looked at us, interrupted her breakfast and said she would move so my son and I could sit together. She then proceeds to yell to an unseen person in the back of the kitchen, "Judy! You're getting busy here, you better call your sister." She turns to us and tells us it may take a while, but we will get served and asks if we want to read her paper while we wait, pours herself a cup of coffee to go and says good bye to the hidden Judy as she gulps down her last few tasty bites.

Mere seconds later "Judy" pops out from the kitchen with plates full of food for one of her tables. "Sorry for the wait, fellas, I'll be right with ya." she says with a smile. Judy goes about five foot four and well over two hundred pounds, has lost her share of teeth but smiles with unselfconscious abandon. She is busy and happy. She looks at the couple sitting next to us and says, "The usual?" at which they nod. She then appears back in front of us and asks what she can get us to drink. A quad espresso and a Mountain Dew are the answers. She is a blur of movement as she runs back into the kitchen, starting the espresso machine with the flick of her thick wrist along the way.

Out of nowhere appears a slightly shorter but no less plump version of Judy with a complete set of teeth. This, most obviously, is her sister, who walks over to us and asks what we want to eat while searching for a pad and pencil to take the order. My suggestion of using a napkin is pondered briefly but she knows it just won't fly in Judy's kitchen. We both order "The Pile" which is a base of grilled hash browns and onions topped with sausage gravy, fried egg and cheese. As I order, my heart screams at me to stop and think twice. Either that or please double up on the Lipitor. 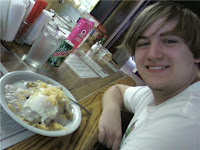 Judy's sister brings our drinks and rushes back to the kitchen to bring out the next order. The place is alive. Not crowded, but alive with chatter and the sound of the local radio station talking about crops and the Tillamook County Fair. "Don't miss the destruction derby at the fairground tonight..." It was like walking into another dimension of time and it was wonderful - Judy with her less than toothy grin, no nonsense sass to any customer willing to challenge her to a battle of wits and great food that seemed to be made to order for the farm hand ready to step out into the fields to set sprinklers or herd the cows in to be milked - this is Tillamook, you know, home to Tillamook Cheese. What a great way to start our day. I felt like my Mom served me breakfast with attitude. (We found out more about Judy on a return trip the next day - more about this at another time.) 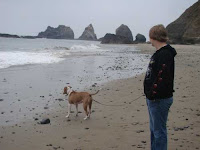 Then it was off to the beach. Our dog, a seventy pound pit bull named Ezmond, had never been to the beach so we had no idea how he would react to the sand and surf. Ez is a big pussy who hates to go out into the rain even if he hasn't relieved himself in hours, so for him to get into the water was a huge question. We weren't even sure he would want to walk out into the sand...too dirty for his dainty paws. Turns out he loved it. Ez and my son took off on a run and were as happy as pigs in shit. For Ez all the new smells were heavenly. Seaweed. Driftwood. Dead crab. Fire pits. Prints and marks of other dogs. He loved it and the way he expressed how much he loved it was with a great pee-fest, marking everything he could until he could only lift his leg for effect. 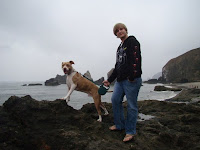 Ezmond was truly the star of the show as the day went on. He had gotten over his whiny "I'm so far away from home and miss my mommy" attitude and started to man up. The three of us took off later in the afternoon for a second walk on the beach. We walked past a boat launch on our way and ran into yet another colorful local. This man had parked his car. Hopped out and walked straight toward us. His weathered, tanned and wrinkled face looking us up and down before blurting out the question, "Does he have his nutz?" in reference to Ez. Sadly, I answered no. I am sure not as sad as Ez must have felt for being emasculated in public. 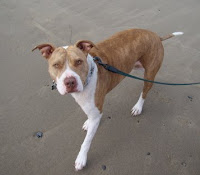 The local went on about how his blue heeler got tagged by a pitty. How the pups were the best he ever had and he was hoping that this handsome and muscular figure of a canine would want to offer his services to his bitch who was waiting patiently in his rusty, parked car. The bitch looked a bit old for what this local had in mind and I think Ez would have had to be wearing beer goggles to make heat with this coasty had he actually had the balls to do so.

For my fifteen year old this was an eye opening experience. I don't think he had run into a person, outside of some character on South Park or one of his other late night shows, that came across in such a direct manner. We have added the question - Does he have his nutz - to our ever growing list of inside jokes. He also learned more about doggy buggery in that short period of time than most will care to hear in a life time.

Ahhh, the Oregon Coast. A blend of farmers, fishermen, loggers and "ladies". It was a wonderful day with my boy that never would have happened with mom and sis in tow. God love 'em, but a boy's got to have an adventure.
Posted by Monkey Man at 8:07 PM

Inside our hands, outside our hearts said...

Sounds like a beautiful time MM. How wonderful that your son got the chance to exoerience time with you alone. So many young boys do not have that option. I know one very close to my heart that has never experienced that and unless someone wonderful enters our lives, he may never. Kudos for being a great dad.

And there is the difference between Detroit and Oregon; "Does he have his nutz" means something else entirely.