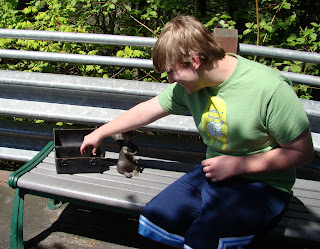 Blessings should be counted. Among my blessings is a kind gentle soul who will be 15 in about a month. He is my son, Sean.

Why do I count him among my blessings? Well, allow me to recount a recent evening. My wife and daughter had grabbed the car keys and fled on a mission to find flying monkeys (monkeys play a big role in our home). So I went to knock on the door of his man cave to let him know we had the house to ourselves.

Up the stairs he ran, laptop in hand and a huge grin on his face. "You've got to see this Dad, it's really funny," he blurted. Seated on our couch, he pulls up a video from the Adult Swim web site he likes to browse. He has found a mocumentary on spiders building webs while being put under the influence of various substances and, yes, it was very funny. The boy has his old man's sick sense of humor.

That video was followed by another he found of a kitten being given a "bath" in a pet spa. Bath in this instance is a euphemism for torture. Again, this appealed to my sick and twisted side. I was so proud.

We spent the next hour or s0 talking Trailblazers, watching ESPN's NFL Live and Sports Center. Sean is a wealth of knowledge on sports, devouring sports news and carefully compartmentalizing the finest of details. His interest in sports began as a way to connect with his father who was sometimes distant and closed off. 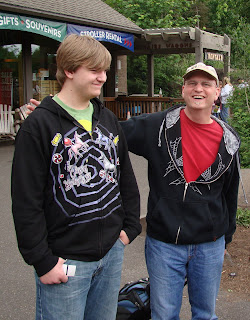 We are now learning new ways to connect. Comedy is one. His love of video games is another (he tries so hard not to beat his extremely competitive old man....it is very charming).

This is a very smart lad that I am proud to call son. He is patient with his sister. Kind and loving to his mother. Reminds all of us when we are being superior or negative. Truly playing the role of gentleman, but with the edge of a comedian.

I can just see the wheels turning as he observes the world around him. I have suggested he keep a notebook to write in bits and pieces he can use for his future stand-up routine. That just isn't Sean. He may keep a mental catalog, but to write something down doesn't fit with his demeanor to lounge in a hammock next to a cooler of cold beverage, let the world be and allow him to laugh at it and with it. That's my boy.

Even today as he occasionally goes through periods of teen angst that positive and gentlemanly attitude shines through. When he gets upset, it is usually due to some injustice he feels needs righting. Looking to bring the positive into everything.

He has been this way since he was a baby. I can remember saying to myself when this smiling tub of goo that could barely hold up its head would giggle and drool in happiness - "I wish I could have his attitude every day."

Now, it is different in that he holds his head up high at just over six feet tall, isn't anything resembling a tub of goo and doesn't drool on himself anywhere near as often. He still giggles and smiles and has a positive attitude (for a teenager) that is worth emulating.
Posted by Monkey Man at 12:09 PM

You seem to have a fine family growing in your garden there old man. I personally am not sure whether I like my kids better as almost 30 somethings or their smart ass teen age years.